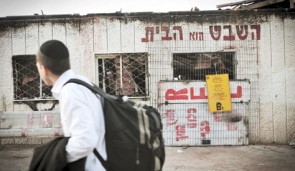 Choose your own apocalypse. (Forward)

Survival books to keep on your bookshelf in case of the apocalypse. (io9)

The least-funded Kickstarter campaigns ever. (MAD)

Flashback: When the skateboarding craze took over NYC. (Gothamist)

On Iran, U.S. Jewish leaders will defend Israel down to last drop of Israeli blood. (+972)