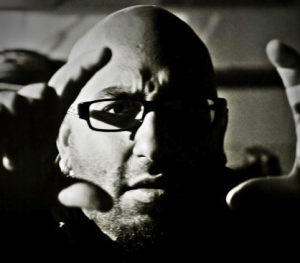 Supreme Court Justice William Brennan famously defined pornography with the now-famous quip: “I know it when I see it.” Lord knows what he would’ve made of the work of parodist Lee Roy Myers whose creative output seems to resist classification.

Take for instance the scene in his recent Katy Perry spoof, Katy Pervy, in which the famously-titted, titular character (played by Kimberly Kane, a dead ringer for the 27-year old pop star) turns herself around mid-coitus to tell “Elmer” (Anthony Rosano in a ridiculous, furry suit in the same shade of red as Sesame Street’s Elmo) to enjoy the view. Elmer’s high-pitched response? “I hate that show.”

“I have a surreal job: a mainstream sensibility in a non-mainstream universe,” says the 34-year native of Montreal. Myers takes his nom de plume from an African-American tap dancer, thereby continuing a time-honored tradition of Jews stealing black acts. When it comes to his work, he takes expansive view, seeing parody as a widespread contemporary impulse apt to surface in strange places, rather than a specific cordoned-off genre. “If you think about it, even Debbie Does Dallas was a parody,” says Myers. “Though they never said it, they were referencing the public’s fascination with the Dallas Cowboys Cheerleaders during the 1970’s.”