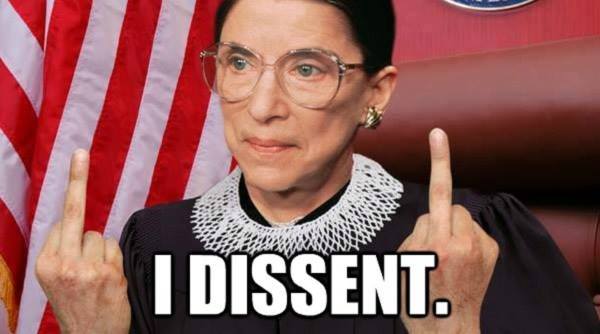 As part of the Supreme Court’s 5/4 ruling in favor of Hobby Lobby’s “religious corporatehood” Justice Ruth Bader Ginsburg authored a truly blistering dissent, in which she trolled conservative Justice Antonin Scalia, and ultimately warned that the court has “ventured into a mine field.” The whole opinion is worth reading (Its here, starting on pg. 60), if only to appreciate just how much of a badass on the bench Ginsburg is.

That said, if you find yourself without the time or constitutional expertise to parse through a high legal document, singer/songwriter Jonathan Mann has saved you the effort by setting Justice Ginsberg’s dissenting opinion to music in the form of a two-minute pop song (part of his “song a day” project).

Sure, it’s a little overly “sensitive college guy music” sounding, and yeah, it’d probably be better if a song about woman’s reproductive rights was sung by an actual woman (does Justice Ginsburg croon?), but all things considered it’s a great way to remind yourself that not everyone on the Supreme Court thinks a store that specializes in glue and glitter should decide what a woman does with her own body.