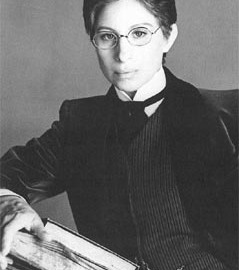 What do you think, sexy cross-dressing Babs?

As someone who understands what it’s like to get called sexy for their Semitic features, I was intrigued by Jewrotica.org’s recent announcement for their “Hottest Rabbi” contest. Sure, we’ve all known a rabbi or two with whom we’d like to fulfill the miztvah of having sex on the Sabbath. But a contest for the “Hottest Rabbi?” We’ve already seen lists of tattooed rabbis and “hip” rabbis, so why the need to seek out the hottest, now?

I checked in with Ayo Oppenheimer, the erotica maven behind Jewrotica, and Emma Morris, the site’s managing editor to ask:

Why on earth are you doing this?

Emma:  I find the Sexiest Rabbis list compelling because it changes the way that people think about rabbis – the stereotype of what the rabbinic image is supposed to be.  The image of spiritual leaders in eastern religions is often sexy – Bhagwan Shree Rajneesh and Chogyam Trungpa are examples from the 60s and 70s – so why not rabbis, too?

Also, while Ayo and Jewrotica have made it clear that this contest is not about the physical, but rather about intellectual or community-active rabbis, I should note that there have been several pieces written for and published on Jewrotica that have centered on the sexy, sexually-engaged or sexually-appealing rabbi figure.  Though explicit sexiness is not the focus of our list, a rabbi’s wealth of knowledge combined with his or her ability to reach peoples’ hearts and souls has the potential to make the rabbi an electrically charged or “sexy” figure.

Ayo:  Excellent points.  The way I see it, the list has two purposes: the light-hearted purpose is to poke fun at all the ridiculous lists out there.  Our use of the word sexy reflects our culture and vocabulary here at Jewrotica, but is also a bit tongue-in-cheek.  The deeper purpose, however, is to shed light on the inspiring works of rabbis who don’t often get the spotlight.  Our readership is in the tens of thousands and includes a fair amount of less-affiliated individuals who aren’t exactly subscribers to The Forward.  Being able to introduce this population to rabbis that rock is pretty sweet in itself… Though my little sister teases that this is all just a matchmaking ploy!  After all, I get to sit back while my darling readers research and compile a list of young, intelligent, attractive and largely single rabbinic do-gooders.  I’m not itching to become a rebbetzin any time soon (nor are any of the Jewrotica team members, I think), but my goodness are these men and women impressive!

How do you think this might advance a rabbi’s career?

Emma:  Highlighting the rabbis who are doing fearless, innovative, and yes, sexy things could, like Jewrotica, enhance the conversation about how Judaism is relevant in the 21st century, and how it is a living, breathing religion with a very diverse community…

Ayo:  Spot on.  I understand that some rabbis will prefer not to be included in a list that dares to use the word ‘sexy’, but our readership is strong, our brand is increasingly being recognized in a positive way inside and outside of the Jewish community, and acknowledgment from Jewrotica could offer significant exposure to a rabbi who is early on in his or her career… the good kind of exposure.

Do you plan on doing a calendar of the top 12?

Emma:  I don’t think Ayo is planning on doing a calendar, but I’d sure like to see it!

Ayo:  Man, oh, man.  What an idea. The playful entrepreneur and artist in me says ‘hell, yeah!’, though the Jewish educator and community organizer in me feels compelled to nix the idea.  Out of respect for our spiritual leadership, there will regrettably not be a Jewrotica’s Sexiest Rabbis 2014 Calendar, but that doesn’t mean that Heeb can’t get in on the action…

I see you changed the name from “Sexiest Rabbi” to “Hottest Rabbi” because some people got upset.  I’m shocked that someone was offended by your pairing of the holy office of rabbi with the completely unnatural act of boning. Why is “Hottest” a more appropriate term?

Ayo:  Agreed. The words ‘sexy’ and ‘hot’ offer different connotations. I still stand by the initial “Sexy” descriptor, and perhaps the final list will sport that name. At the end of the day, it may be a matter of semantics. But I am a major advocate for respect, communication and shalom bayit (peace in the home). That doesn’t mean succumbing to pressure from haters, but if tamping down the name from “Sexy” to “Hot” is going to make some of these rabbis (many of whom are my friends) feel more appreciated, more respected and more keen to be on the list, then it’s a no brainer.  Shalom bayit for the win – because consideration is sexy.

Unfortunately, I’m left feeling as if there isn’t much that’s new here beyond the basic “Yay! Feel cool about ourselves because we’re Jews!” idea — And really, that’s fine, nothing wrong with that at all. Except, unfortunately, it runs the risk of being a little boring.

A “hottest” contest that sidesteps sex? On a site that explore the overlap between “eros” and “Jewish”? We’re left with something touchy-feely (not in the sexy way) that ultimately seems like a bit of a let down. Jewrotica is typically a unique, exciting site, which provides content combining erotica with Judaism in a way that is both interesting and titilating. When held up to their normally scintillating baseline, this contest can’t help but seem mundane.

But hey, don’t let that stop you participating; If you know a hot slice of rabbi you’d love to get some intimate study time with, nominate them before November 15th.

And while you’re at it, why not throw out some suggestions for some scintillating contests for other faiths, too? Here’s a few to get you started.

Add yours in the comments!