This one comes from an eagle-eyed Heeb reader, who passed along a craigslist posting seeking a “Jewish Fall Boyfriend” with the following message:

Saw this while on the #jobhunt Is it considered a job if you’re gonna have to pay? @heeb #badjew http://t.co/1MBitUNTpm

Truth be told, I honestly can’t be sure if I’m looking at something monstrously clueless or brilliantly self-aware. Where to even begin? The fact that this is posted under Craigslist’s “gigs” section, and not its personals? That it includes lines like: “Frat necessary (unless you were in a hilarious Jewish comedy group), AEPi or ZBT preferred. If there was a Sigma in your frat’s name it better be followed by an Alpha Mu.” The whole thing is a horrorshow of – and/or – master clinic in Jappy stereotypes. 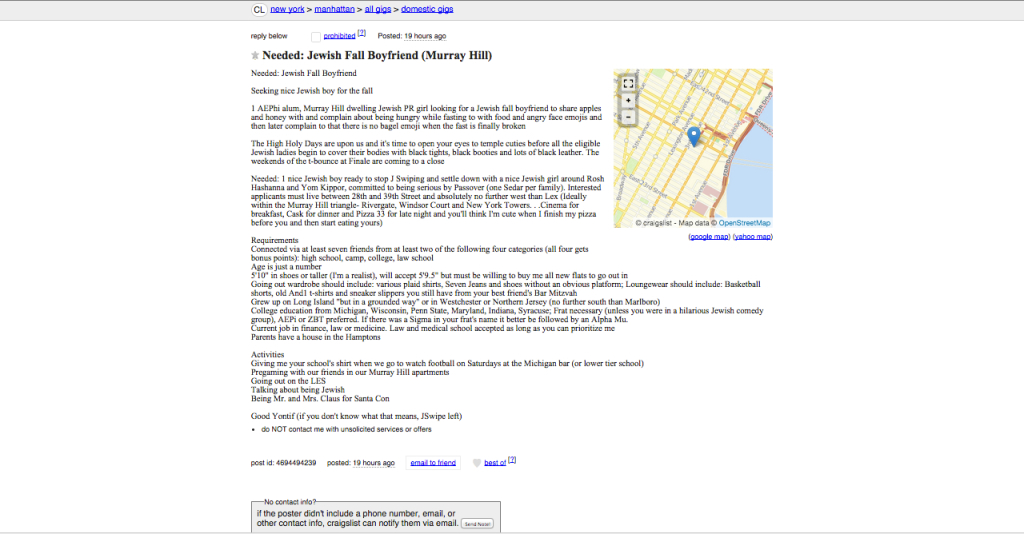 You can practically smell the pumpkin spice wafting from the screen.

1 AEPhi alum, Murray Hill dwelling Jewish PR girl looking for a Jewish fall boyfriend to share apples and honey with and complain about being hungry while fasting to with food and angry face emojis and then later complain to that there is no bagel emoji when the fast is finally broken

The High Holy Days are upon us and it’s time to open your eyes to temple cuties before all the eligible Jewish ladies begin to cover their bodies with black tights, black booties and lots of black leather. The weekends of the t-bounce at Finale are coming to a close

Needed: 1 nice Jewish boy ready to stop J Swiping and settle down with a nice Jewish girl around Rosh Hashanna and Yom Kippor, committed to being serious by Passover (one Sedar per family). Interested applicants must live between 28th and 39th Street and absolutely no further west than Lex (Ideally within the Murray Hill triangle- Rivergate, Windsor Court and New York Towers. . .Cinema for breakfast, Cask for dinner and Pizza 33 for late night and you’ll think I’m cute when I finish my pizza before you and then start eating yours)

Requirements
Connected via at least seven friends from at least two of the following four categories (all four gets bonus points): high school, camp, college, law school
Age is just a number
5’10” in shoes or taller (I’m a realist), will accept 5’9.5″ but must be willing to buy me all new flats to go out in
Going out wardrobe should include: various plaid shirts, Seven Jeans and shoes without an obvious platform; Loungewear should include: Basketball shorts, old And1 t-shirts and sneaker slippers you still have from your best friend’s Bar Mitzvah
Grew up on Long Island “but in a grounded way” or in Westchester or Northern Jersey (no further south than Marlboro)
College education from Michigan, Wisconsin, Penn State, Maryland, Indiana, Syracuse; Frat necessary (unless you were in a hilarious Jewish comedy group), AEPi or ZBT preferred. If there was a Sigma in your frat’s name it better be followed by an Alpha Mu.
Current job in finance, law or medicine. Law and medical school accepted as long as you can prioritize me
Parents have a house in the Hamptons

Activities
Giving me your school’s shirt when we go to watch football on Saturdays at the Michigan bar (or lower tier school)
Pregaming with our friends in our Murray Hill apartments
Going out on the LES
Talking about being Jewish
Being Mr. and Mrs. Claus for Santa Con

Good Yontif (if you don’t know what that means, JSwipe left)

For what it’s worth, here at Heeb we know a thing or two about dipping toes (among other body parts) into the Jewish dating pool

Have you applied to be a “Jewish Fall Boyfriend”? Are you the brains behind this ad? Let us know in the comments if you’ve found true love, or just a high holidays hookup.

UPDATE: Well, sometimes it’s better not knowing. It looks as if this whole thing is a spoof on this equally (and actually) unhinged CL post. I guess the Jewish men of Murray Hill are safe. For now