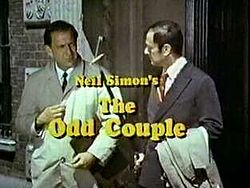 If, like Jewdar, you spent a lot of time watching UHF tv in the 1970’s and 80’s, you spent a lot of time watching re-runs of The Odd Couple.   As a kid, it was one of our favorite shows, and though we haven’t seen it in a while, our appreciation for it has grown, both as a show about New York City, but also as a classic example of “Jew-Lite,” since even though both Tony Randall and Jack Klugman were Jews, and those in the know certainly perceived Neil Simon’s characters as Jews, except for the occasional Christmas episode, no reference was ever made to religion or ethnicity, and the only explicitly Jewish character was their cop pal Murray Greshler (naturally, played by Italian Al Molinaro).  Still, we all knew.  Yesterday, Jack Klugman, aka, Oscar Madison, passed way at the age of 90.  Although he played many roles in career that spanned six decades, it will be as Oscar (aka, “the messy one,” aka, “the straight one”) that he will be remembered.  None of us should be surprised if after our 120 years, we find that the World To Come is a little on the messy side.