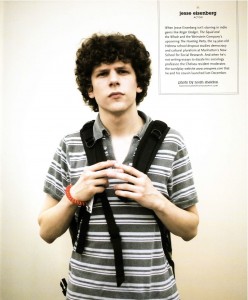 Jesse Eisenberg back when he was a Heeb 100

My frame of reference for the Friars Club is the Seinfeld episode in which Jerry loses a jacket on loan from the heralded organization of comics and entertainers. That and, of course, their roasts on Comedy Central. So when the invite came to attend a screening of Holy Rollers with Jesse Eisenberg in attendance at the institution’s gilded midtown home, I jumped at the opportunity.

As Heeb’s lead film critic for about a year, it’s a bit astounding that I actually missed Holy Rollers on its theatrical run. The film, now available on DVD, is about Hasidic Jews from Brooklyn who trafficked ecstasy into the states during the 1990s. Eisenberg dons peyas and a black hat in a role that puts all of his other on-screen Jews to shame, Mark Zuckerberg included.

I arrived to the event a bit early in hopes of getting a seat. The Friars club feels like a large townhouse, or, more specifically, a mahogany laden frat house. Rooms are named after entertainers with pictures all over the walls of the famous faces who have visited over the decades. Before the screening the action was in the Milton Berle Room, which is the bar. You could smell the sauce from the hallway; people with large goblets were laughing, chatting and making a beautiful ruckus. It was, intentionally, like stepping back in time.

Once things got underway, late, we made our way into a makeshift screening room. The crowd was loud and well-juiced, ready to be entertained. First up was the Oscar-nominated live action short film God of Love from filmmaker Luke Matheny, who created the film as his NYU thesis project. It is a bland, black and white snoozer about a dart throwing lounge singer who is ostensibly given Cupid’s arrow. The film played at the Friar’s Club Comedy Film Fest last fall and was invited back given its nomination, with Luke in tow. It’s a very solid student film, and that’s the best thing I can think to say about it.

Oddly, God of Love and Holy Rollers share the same producer, Ryan Silbert, who was there for the Q & A along with Eisenberg, producer Jen Gatien and producer/actor Danny A. Abeckaser. After the short film rolled out, we were told we would have a brief intermission so as to wait for the Holy Rollers talent to make it to the club. Apparently they were all running late. This event I was told to be at for a 7:30 start time didn’t run the feature until 8:45, but I waited patiently, biding my time by wandering upstairs and finding a bathroom. It was a very nice one. Everything bore the Friars’ seal.

Finally, the film started and I have to say I thoroughly enjoyed it. It certainly waters down the Boro Park lifestyle unlike Romeo and Juliet in Yiddish, making it much more watchable. It’s a great character study, again showing off the nuance of Eisenberg’s craft. It’s impossible to explain what it is that makes him a great actor. To a layman, it appears as though he is acting like himself, but that’s the brilliance. Sammy Gold and Mark Zuckerberg are completely different character efforts, and yet it just seems like Jesse being Jesse. That’s what he’s good at, though; that’s what allows him to slip in and out of roles.

Perhaps Eisenberg’s funniest moment in the Q & A after the screening was when someone asked if his preparations to play Sammy were similar to playing Zuckerberg, noting similar aspirations (read: a lot of gelt) for both. Jesse quipped “Yes, both characters do end up in clubs with bad people in the films,” getting a dig in against the asker. Relating characters to an actor is basically saying he can’t act.

Another juicy bit he dropped was that he wanted to shave his head for the film to be more accurate to the sect he was portraying, but an unnamed movie studio barred the production from making that happen. It took almost four years to get Holy Rollers made, two of which had Jesse attached before shooting. He stuck with the project while the producers found funds to make it, researching Hasidic Jews in Boro Park. In the meantime, he became a movie star, the pinnacle of which is his Oscar nomination for The Social Network. As such, whatever studio pic he was in while shooting Rollers (Adventureland, Zombieland?) got some form of injunction to keep his coif in place. As he put it, “we made up our own sect, and they’re alive and well.”