No, Jackass‘ Ryan Dunn Was Not Killed In Gaza.

Well this is awkward

A recent New Zealand Herald cover-story on the death of IDF Staff Sargent Guy Boyland mistakenly featured a photograph of Jackass star Ryan Dunn. The wildly incorrect SNAFU wasn’t caught until after the paper went to press, although the error was addressed and corrected (but not explained) on the Herald website. 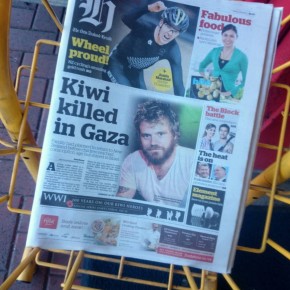 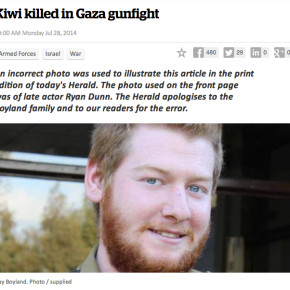 According to the Herald, Boyland, an engineer in Israel’s 7th Armored Brigade, was born in New Zealand and lived there until he was five, at which time he and his family moved to Israel. He died during a firefight with Hamas militants as part of the ongoing Israeli military action in the Gaza strip.

Sharing seemingly nothing in common with Boyland except a reddish beard, and shaggy hair, Ryan Dunn was a professional stuntman and reality TV star famous for his work on MTV’s Jackass and Viva La Bam. Dunn died in 2011 while driving drunk in his Porsche 911 GT3.