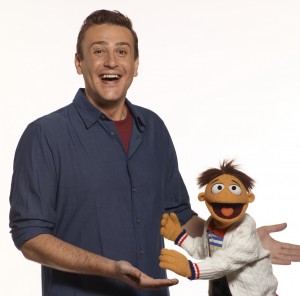 Jewdar was all set to write a rave review of The Muppets. After all, the movie, co-penned by, and starring former Heeb coverboy Jason Segel, is an absosmurfly fabulous film. Three generations of the Jewdar family saw it, and all loved it. Segel, as always, gave a great performance, and as a writer, he’s two for two (he also co-scripted another Jewdar favorite, Forgetting Sarah Marshall). Moreover, Segel is a huge Muppets fan, and the film, beyond being a great movie, is a great Muppets movie (Full Disclosure, when Jewdar was a lad, he toted around a Muppets lunchbox for a couple of years).

So we were all set to praise The Muppets as the kind of movie that reminds you what kids’ movies could be, when we saw that Israel was making another ill-fated foray into the world of winning hearts and minds.

As regular readers know, Jewdar is not generally a big fan of Israeli PR efforts. By the looks of things, this isn’t about to change. In a new series of PSAs posted on various websites (as well as billboards in American cities with Israeli populations), the Ministry of Immigration and Absorption is trying to convince yordim (Israelis who emigrated) that if they don’t come back…well, bad things will happen.

While various American politicians and professional Jews are upset by the message of the spots, Jewdar is more annoyed by the medium, and what it suggests. In Yom Hazikaron, which shows an Israeli with an American boyfriend (unclear if he’s Jewish), the guy playing the “American Boyfriend” sounds like an Israeli playing an American trying to sound Israeli “Hey Daphna, now I get it, the candles, the music, you want to make the love, yes, chaticha?” As for Daphna, what’s her problem? I mean, great, I get it, it’s Yom Hazikaron, but can’t she tell her boyfriend what’s going on? The message at the end is basically “They’ll Always Remain Israeli. Their partners won’t always know what that means.” Uh, yeah, especially if Daphna won’t tell him what the hell is going on. So basically, the message of this is that if you’re an Israeli, and marry an American, he/she won’t always understand you. Guess what? If you’re an American and marry an American, your spouse won’t always understand you.  Not always understanding your partner seems to be a pretty essential part of being in a relationship, and is it really the job of the Israeli Ministry of Immigration and Absorption to be giving dating advice?

Evan that pales in comparison to “Before Chanuka Turns Into Christmas.” We’d give you a link to it, but the ministry, apparently responding to complaints that it’s a big Grinchy, seems to have taken it down. Two Israeli expats and their daughter are skyping with the grandparents back in Israel.  In the background of the grandparents’ home is a chanukiya.  The exchange pleasantries with the granddaughter, and then ask (all of this in Hebrew) if she knows what holiday it is, to which she replies merrily “Christmas.”  Parents look with dismay at each other, grandparents look with dismay at each other, cut to message “They will always remain Israeli.  Their children won’t.”

Now, let’s examine this–For a child who isn’t remaining Israeli, she seems to understand Hebrew pretty well.  More importantly, though, is that while the implication is that her ignorance is the fault of America.    Say what you will, but American Jews love them some Chanuka, and most of them will do something for it.  It’s the two Israeli parents who don’t seem to have a menorah, or to have bothered to tell their daughter about the Festival of Lights.  If anything, this ad says less about what Jewish kids will learn in American schools, than what they didn’t learn in Jewish schools.

Which brings me to the ultimate message.  Keep in mind, the message isn’t that in America, you kids won’t be Jewish, it’s that they won’t be Israeli.  Well, duh.  But last time I checked, Israel just happened to be the name of the Jewish State. The fact that the Israeli couple, educated in the Israeli schools, doesn’t have sufficient Jewish identity or interest makes one wonder what’s so great about being Israeli in the first place.  There used to be a time when students in the Israeli public school track actually learned about Judaism and Jewish culture.  Maybe Israel should be worrying less about whether or not Israelis make yerida, and more about what they take with them when they do.

Failing that, though, we have another recommendation.  If Israel insists on making any more of these spots, might we recommend hiring Jason Segel and the Muppets for the job? The scripts would certainly be better, and the characters would seem a lot more real.