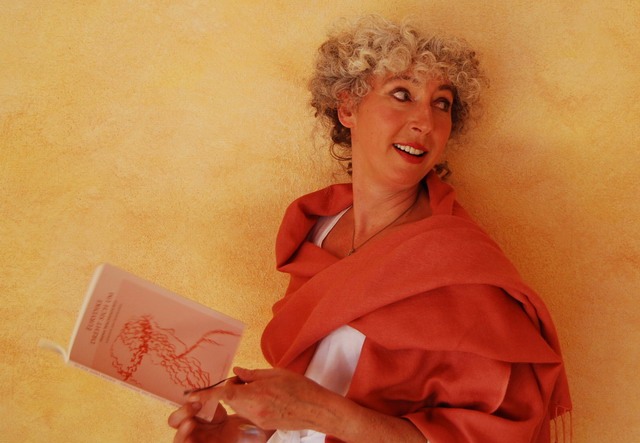 We all have dreams. Uncle Junior wanted to screw Angie Dickinson, my mother wants to work in a funeral home and Irena Wachendorff just wants to be Jewish and the daughter of Shoah-survivors so she can criticize Israel. Is that so wrong?

Up until now, Wachendorff has made a decent career of being an Alibijude, an alibi Jew. The job is easy: If someone is accused of anti-Semitism, alibi Jews are brought in as defending witnesses. It’s the old “some of my best friends are pantomimes” routine, with an added speaking part for friends. In a country like Germany, where the Jewish community is only sporadically visible, being an Alibijude can be a worthwhile endeavor.

If all anyone ever talks about is how Israel is the root of all global evil, people might start to ask questions. This is when the accused is able to point to the the supportive alibi Jew, who in turn is able to point to his or her family history or just basic Jewishness and say something like: “What the Israelis are doing to the Palestinians is what the Nazis did to my parents.”  Even better, you’re one yourself: Geert Wilders, famous for his vehement xenophobia and his stupid haircut, always likes to speculate about some Jewish heritage on his father’s side. Because then, you’re not a Nazi or a racist but a defender of Western values.

As an alibi Jew, Irena Wachendorff is the whole package (except for one simple fact.) Her mother was in Auschwitz—“I grew up with the number on her arm”—her father a tzadik who escaped to England. Irena herself was in the IDF during the Lebanon War. Today she’s a “German-Jewish poet” who lives in Israel six months every year to support an Arab-Jewish kindergarten. The rest of the year, she’s in Germany to act as the hazzan of her congregation and to send violins to Gaza.

Newspapers have written about her work as an activist and she’s been interviewed on local TV. She frequently talks to schoolchildren about her parents’ fate. Wachendorff is also quite active in discussions on the Facebook page of leading politician Ruprecht Polenz, chairman of the foreign council of the German parliament, who has come under attack for perceived “anti-Israel” feelings. Polenz often points to Wachendorff when he needs support, which she will gladly supply:

“I think I should only take seriously someone who 1) was in the IDF, 2) has lived in Israel for at least two years and 3) is even Jewish. Hello…anybody here???”

Anybody here indeed. Because Irena Wachendorff is none of those things. Via some genuine journalism, writer Jennifer Nathalie Pyka—who is what one could call a “staunch supporter” of Israel, think Rory Gilmore meets Bill O’Reilly—found out the true story .

Upon being asked, Wachendorff’s mother says she was never in Auschwitz—“my husband was though.” Probably not as an inmate: He wasn’t an Orthodox Jew but a Protestant officer of the Wehrmacht. A speaker of the Israeli army can find no record of an Irena Wachendorff having ever been in the IDF. During the Lebanon war, Irena Wachendorff acted in various productions in local theaters in the Rhine region. The kindergarten she supports does exist, but there is no evidence of her ever having visited it. And finally, she isn’t a member of her alleged congregation.

This is not without precedent. Every couple of years, some fake Jew is revealed. This very publication once had a contest for the best invented Shoah memoirs. What makes this case so interesting is that a leading German politician was fooled. Polenz has released a statement saying that he’s not resposible for the third party’s opinion, that he still supports this dubious Jewish-Arab kindergarten and he’s disgusted with this prying into Wachendorffs private life: “This is like an Ariernachweis [certificate of being Aryan] in reverse.”

It is Polenz’s association with Wachendorff when it comes to discussing Israel that turned this into a story, however. As Pyka says, “Instead of offering arguments, Wachendorff talked only about her background and her experiences in the IDF.”   Now that it’s clear that Wachendorff has lied about all those things, does that change her work for this Jewish-Arab-kindergarten? She still clings to most of her story, but is she just suffering from some dissociative fugue? Pyka isn’t sure but has called a follow-up article “The Protocols of the Loon of Remagen,” Remagen being the hometown of Wachendorff.

After the initial article, Wachendorff wrote on Facebook that she had deliberately spread false information about herself as to protect her family and her congregation. When the Jerusalem Post called her some days later, she said that she doesn’t really remember what camp her mother was in exactly and that she isn’t too sure whether that’s a number on her arm or something else. After that, she deleted her Facebook profile and hasn’t been heard from since.

There is a lesson to be learned: one of the few things more heinous than an alibi Jews is an alibi Jew who isn’t even Jewish.