“I Want To Be the Next Oprah” 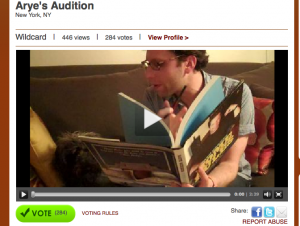 A few weeks back, however, Oprah announced that she’s looking for new talent to host a show on her very own OWN Network. I was intrigued. But I’m not the sort of guy who records a nerdy video, uploads it on a very public website for very public consumption, and then asks people via Facebook, Twitter, and the Heeb blog to vote.

And so, I have recorded a very nerdy video, uploaded it onto Oprah’s website, and am asking Heeb readers to vote for me here. Again, I’m not the sort of guy to do this thing but I am doing it now because, well, how often do we get a chance to make an ass of ourselves in front of America’s housewives? I mean, it practically screams “bucket list.” (Checked off, by the way!)

In addition, because as I learn from my advertising day job, you need to sell things, I have set up my very own Tumblr site which gives background and justification for this whole fiasco. Again, vote here and you can vote as often as you like. Thank you and yes, I will remember you when we’re at that party and I’m in the corner with my bottle of Cristal hanging out with Ludacris and Paul Rudd. I promise.