I Wanna Be Like Kike: Amar’e, LeBron and Jewishness 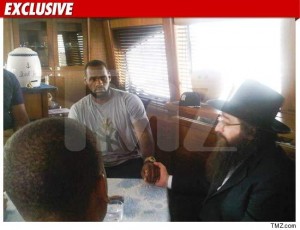 Do you remember the McDonald’s commercial in which Larry Bird and Michael Jordan go shot-for-shot, competing for a Big Mac? As each shot gets progressively more ridiculous (“Through the window, off the wall, nothing but net…”) the message is clear: these guys are so competitive that they will go to absurd lengths to prove that anything one can do, the other can do better. Well, this past month we’ve sort of seen a reprise of that basic theme from recent high-priced free agent signees Amar’e Stoudemire and LeBron James. The reprise, however, comes with a twist.

A couple of weeks ago NBA big man Amar’e Stoudemire discovered his Jewish roots and embarked upon a trip to the Holy Land and now, LeBron James has apparently hired a rabbi to help him in a business deal.  According to TMZ, James paid Rabbi Yishayahu Yosef Pinto up to six figures to join him for a merchandising meeting aboard a yacht off the coast of New York City. Rabbi Pinto, TMZ noted, is known by many as the “rabbi to the stars,” having offered advice to Congressman Anthony Weiner, CNBC’s Donny Deutsch and a bunch of real estate moguls you probably haven’t heard of.

You don’t need a Jewish nose to smell that there’s something peculiar going on in the NBA ether. While Amar’e’s jew-do may have been poo-pooed and LeBron’s spiritual questing may have become the occasion for jesting, there’s something interesting going on here that has to do with Blackness, Jewishness and the NBA power structure. The story of Jews toying with Blackness has a long genealogy in our culture that runs through Al Jolson, Lieber and Stoller, the Beastie Boys, etc…, but what’s interesting about the latest Jewish forays of Amar’e and LeBron is not merely that they have stood the Jewish-playing-with-Blackness trope on its head, but also the timing. Both incidents eerily coincide with the players’ recent, free agency signings: Amar’e for roughly $100 million and LeBron for a little over $110 million.

For weeks, Amar’e and (to a much greater extent) LeBron were courted by the half a dozen or so teams with enough salary cap room to sign them. In a league in which Jewishness has recently come to signify power (NBA Commissioner David Stern and approximately one-third of the owners in the league are Jews), this free agency period left little down that the current locus of power resides among the superstars of the sport. If those superstars choose to conspire (and I mean that in the best sense) to play with one another on the same team as  Dwayne Wade, Chris Bosh and LeBron James chose, then they do so.  If those superstars choose to move from a playoff caliber team to a cellar-dwellar as Amar’e chose, then they can do that too.

So, what then are we to make of Amar’e and LeBron’s Jewish spiritual quests? Whether or not Amar’e is sincere in exploring his roots and whether or not LeBron really craves the wisdom of Rabbi Pinto, these are two men who have challenged the NBA power structure, a challenge that is finding expression in their symbolic forays into Judaism. They’re probably not thinking of their actions this way, but they’re communicating something about power nonetheless. Think of it this way: Remember that scene in The Sopranos when Hesh Rabkin (Tony’s advisor) is being shaken down by “Massive Genius,” a hip-hop artist who claims that he is owed $400,000 in unpaid royalties? Hesh fears that violence may erupt, but Massive surprisingly counters with his own group of Jewish lawyers. I don’t remember if it’s my true memory or just a weird Jewish fantasy, but I do recall Massive uttering something to Hesh in Yiddish just to rub it in. Feeling that he’s hit Hesh where it truly hurts makes the attainment of his royalties that much more enjoyable. Something similar is happening here: Jewishness being employed as a sign of a power reversal.

“Only in America!,” Don King has frequently boasted. Indeed, only in America (and especially the NBA) can expressions of Jewishness become psycho-surrogates for the enjoyment of power. For better or worse, the NBA is having a “Jewish moment” and it’s not because Omri Casspi averaged 10.3 ppg. last year or because Jordan Farmar is wearing yet another championship ring. Something Jewish is happening that transcends the sum of the league’s Jewish parts.

Hell, even Shaq is getting into the mix.