This past weekend was the New York Comic Con, and Heeb joined the Hazarai booth where the podcast Ko-Point was recording. Ko-point asked about collectibles, but Heeb asked some questions of their own. Guests included:

Seth Kushner: Creator of the comic auto-bio series Schmuck. His new book is Leaping Tall Buildings: The Origins of American Comics, for which he is the photographer. (He’s also a former photographer for Heeb Magazine!)

David Hine: Writer of Cowboys and Insects for Aces Weekly, and Bulletproof Coffin with Shaky Kane. Currently working on Storm Dogs for Image Comics with artist and friend Doug Braithwaite.

Matthew Inman: Creator of theoatmeal.com, his new book is How To Tell if Your Cat Is Plotting To Kill You. This is the same badass who showed up those jerks at Funny Junk, and helped fund the a new Tesla Museum.

David Lloyd: Creator of Kickback, illustrator of V for Vendetta. Currently working on Aces Weekly, an exclusively digital comic art magazine. (It’s awesome because there’s not buyer involved, all the subscription profits are split equally among the artists.)

Ben McCool: Writer for both DC (Superman) and Marvel (Captain America). (That’s the equivalent of being comic book queer, yes?) Also the writer Image Comics titles such as Pigs and Choker.

Danny Fingeroth: Writer of Disguised as Clark Kent: Jews, Comics, and the Creation of the Superhero, and more recently The Stan Lee Universe.

J.T. Waldman: Creator of the graphic novel Megilat Esther, and illustrator for Harvey Pekar’s Not the Israel My Parents Promised Me. 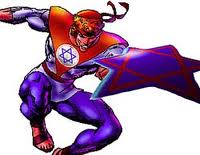 Who do you think is the most Jewish superhero?

Seth Kushner: Peter Parker, even thought he’s not supposed to be Jewish. It’s the guilt angle, and it’s not guilt about Jesus, it’s guilt about his uncle who was murdered. For me it’s like my mom, for him it’s his uncle. When Brian Michael Bendis, who’s a very Jewish writer, is writing him, a quarter of his dialogue is Yiddish. He’s SO Jewish.

David Hine: The Spirit. I have to assume he’s Jewish because of course Will Eisner is. I always think most superheroes are Jewish because most of the creators were.

Matt Inman: Jew-per-man! Because I can’t think of anything else.

David Lloyd: Well it has to be Superman, doesn’t it? It has to be, because he was created by two great Jewish creators. It was such a pioneering thing, it’s the original, and you could say the best in one sense, because it’s the crystallization of a great idea. And also it turned the tables on the Nazis, that’s what I loved about it. Because they were always looking for the uber-mensch, and look what happened!

Ben McCool: Possibly The Flash? But I dunno, maybe not. Kinda super fast and sleek Jews?

Danny Fingeroth: I will twist the question a little and say that in my book Disguised as Clark Kent: Jews, Comics, and the Creation of the Superhero, published by Continuum, I find the Jewish roots of The Mighty Thor. Thor spent a lot of time wanting to intermarry with a mortal woman, and his father Odin, with the very bearded Biblical look, basically forbid him to do that. It wasn’t just a subplot that was in one issue, it went on for months and months and months, that is must have been somehow subconsciously of concern to Lee and Kirby.

J.T. Waldman: Besides Harvey Pekar? Right now, probably Batwoman. She’s into the Kabbalah, I mean, I don’t know if she’s going to schul . . . I think in mainstream comics, she’s probably the most high profile right now. There’s the obvious one of Superman . . . he’s not practicing, but I mean he’s from a destroyed place, he was put in a little basket, he was raised by foreigners, he took a shiksa name and works in media, what else do you want? And Kitty Pryde, duh.

Leon Doell: Tough call. I mean, is Jesus a super hero? The flowing robes are sort of like a cape and I’m willing to bet the guy had a hell of a crane kick. So yeah, either Jesus or Shadowcat. 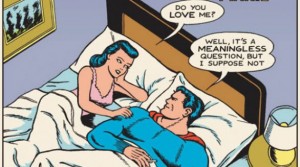 If Superman married a Jewish girl, and was to convert, therefore having to undergo circumcision, would it even be physically possible to circumcise him? And would it hurt him?

Seth Kushner: It would have to be a mohel who uses a kryptonite scalpel. Otherwise, he wouldn’t be able to cut the foreskin. If he had the proper scalpel fashioned from kryptonite, he would feel pain.

David Hine: Oh my God. I was not expecting that question. I don’t think it would actually be possible unless you expose him to kryptonite. In which case it would probably hurt like hell.

Matt Innman: I think it would hurt him, you’d have to probably glaze his crotch in kryptonite first, and then slice. I can’t think of a better way to apply a crystal to your penis other than glazing it.

David Lloyd: Circumcision of superheroes is outside my usual ring of understanding.

Ben McCool: It would certainly be possible, though you’d have to use some epically super strong chain straw. Possibly the kind the grips could be made of some kryptonite-type substance. But that would maybe shatter his willy all together. So it would have to be a mixture of kryptonite and something else. Kryptonite to penetrate the skin, but then other stuff just to not completely mangle his man business. Because his misses would be pretty distraught about that. Could you imagine Superman shagging though? Oh my God, he’s be like d-d-d-d, he’d be like a sowing machine, man!

Danny Fingeroth: Doesn’t he cut his own hair by bouncing his heat vision off a mirror? Well, I guess he could circumcise himself.

J.T. Waldman: I have to admit, I grew up watching the Christopher Reeve movies, and then I never really read any Superman stories. I heard you talking to Danny about shooting the laser beams in the mirror, but I don’t know if he’s certified as a moil so I’d be concerned if he would cut off a little too much. Thirteen-year-old boys have very serious conversations about the genitals of their favorite superheroes, and so really, he’s “The Man of Steel.” So what is he shooting out when he “arrives,” and would that hurt someone? So then I’m wondering if Superman really just celibate? He must have contact, but I don’t know if he’s getting off, and it must be really lonely.

If you could spend one night with any superhero or comic book characters, who would it be?

Matt Inman: Probably Wookie Jesus, or some variation of a Wookie. Do they have female Wookies? I’m assuming they do. Because I could brush its hair out and make a whole nice evening out of it, strawberries and stuff. [Heeb: So if you were going to “high five a vagina,” as you say, you wouldn’t want them to shave first?] No, I like it to be like a jungle cruise, moreso than a desert stretch.

Ben McCool: That would probably be Poison Ivy. I do like the kind of more debauched ladies.

Danny Fingeroth: Spiderman would probably be interesting to hang out with. He’s a native New Yorker like I am. If I had to pick one female superhero to spend the night with . . . Wonder Woman, because she’s Wonder Woman. Maybe she is Jewish, who knows? I know a lot of Jewish amazons.

J.T. I’d have to say The Invisible Woman and Mr. Fantastic, because with them you get it all. They’re gettin’ freaky in the bed. And to create Franklin, who’s like the most powerful superhero ever, something magical’s happening there. A sandwich between the two of them, you’ve got everything covered.

Leon Doell: Platonically or intimately? You know what? It doesn’t matter. The answer is Vixen from the Justice League. She can literally have the traits of any animal. One second, she’s pretending to be a antechinus, an Australian marsupial that can have sex for two weeks straight and then the next, whammo, she’s a bear and catch us salmon for a dinner. Oh and she can beat up people for me. This is a really sexy conversation.