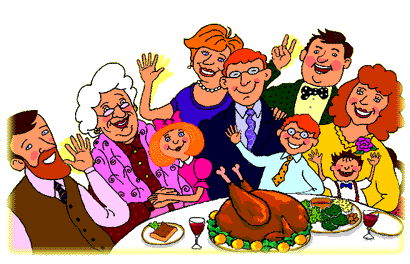 As you sit down with your family this evening for the sacred tradition of giving thanks that a bunch of extremist Christians landed on a giant rock hundreds of years ago, remember: Uneventful family conversation is safe family conversation. And safe is boring. Here are a few tips to spice up the banter: 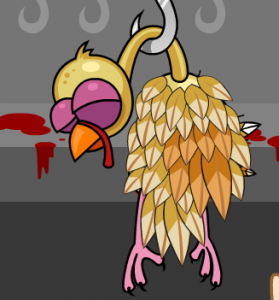 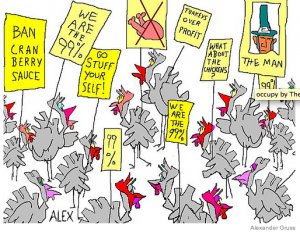 2) Create an “Occupy Thanksgiving” movement in your dining room. This works best if you haven’t showered in a couple of days. If you have, just roll around in some garbage before laying a sleeping bag on top of the dinner table and sticking a sign in the flower vase that reads, “I Hope Aunt Chaya Serves Yams Better Than the NYPD Serves and Protects.” If you are criticized for being a year behind on this disruptive tactic, start yelling about how the “Occupy Goldman Sachs” movement is still going on and that CEO’s are still getting bonuses. Then, start yelling Communist buzz words until your family members roll their eyes and walk away, leaving you ample time borrow the car.  Drive to the nearest Starbucks and wash yourself in their sink. 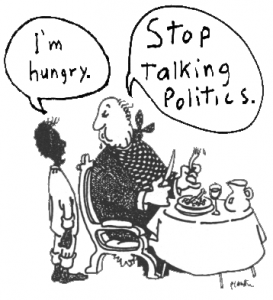 3) Pull a David Mamet and start berating everyone for their political beliefs. If your family is conservative, use the word “legitimate” as often as possible. (“Please pass the legitimate stuffing.” “If this was turkey was legitimate organic, it would never have been slaughtered.” etc) If your family is liberal, cut your finger on your butter knife and demand everyone at the table give you a dollar so that you can go buy bandaids. 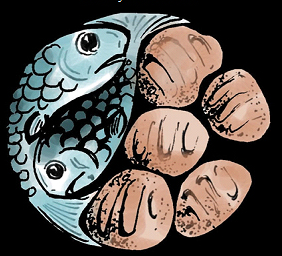 4) Volunteer to bring the cornbread and wine. Then, show up with raw fish and water, and announce, “If we were Christian, these would have transformed. But NO, you had to pick the religion where we have gefilte fish instead of chocolate eggs and then burn in Hell for eternity.” This is especially fun if you’re in an inter-married household.

5) Bring up Israel. Or Gaza. Hell, just the word “rocket.” will do it. (On second thought, whatever you do, skip this one. It’s too easy, too sad, and way, way too soon.)