Hava Nagila (The Movie): (The Review) 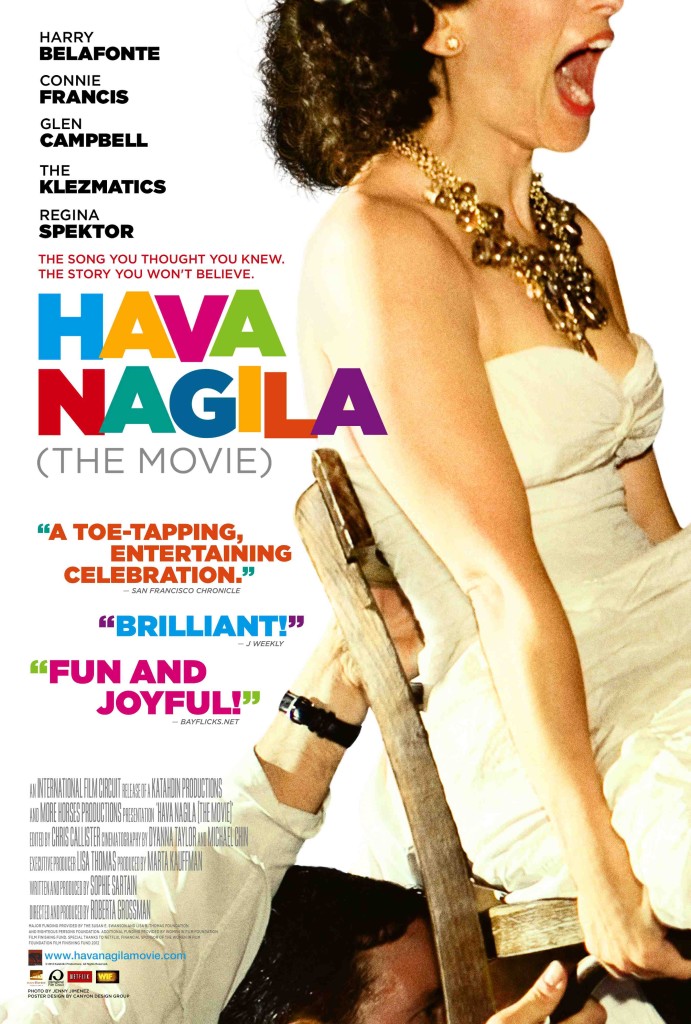 Let’s begin by saying that Jewdar loves us some Hava Nagila.  That said, as reviewed by us, Hava Nagila (The Movie) will be both the beneficiary and victim of that love.   First, let’s establish what it’s about–the filmmaker, Roberta Grossman, is setting out to do one of those easy-hard-easy-hard documentary tasks–tell the story of something that everybody knows, but that nobody knows about.  On the easy side, everyone knows about it, so there’s some built in interest.  On the hard side, everyone knows about it, so a lot of them are going to say “What, a documentary about that?  I already know that.”  On the easy  side again, a lot of people are going to say, “Oh, that’s interesting, now that I think about it, I don’t know anything about that,” but then on the hard side, a lot of people are going to be dissatisfied because the filmmaker is inevitably going to leave out something that somebody finds interesting or thinks they know about the subject.  So let us say that Jewdar finds the subject interesting, Jewdar wants to know more about it (and Grossman did a good job of that), but Jewdar did leave a bit dissatisfied as well.

The film itself suffers a bit from the nature of Hava Nagila itself–is it kitsch?  Is it a serious piece of Jewish culture?  The answer is “both,” but that at time makes it a difficult topic to really do justice to.  The movie takes us back to the song’s beginnings, and there’s definitely some fascinating stuff there in terms of its origin story (SPOILER ALERT) as a Chasidic niggun.  However, from an anthropological perspective, Jewdar was less-than-smitten with the decisions the filmmakers made, despite the fact that those decisions served to highlight the intimacy of the subject matter (more on this at the end)

It’s a pretty basic rule of modern anthropology that when you write about the culture of brown people, you talk to brown people.  By the same token, when you are writing about a niggun arising from the Sadagorer Chasidim, you should probably talk to some Sadagorer Chasidim (they do include a member of the Sadagorer Rebbe’s family who the film crew bumps into in Ukraine, but don’t ask him about the niggun).  There is still a Sadagorer Rebbe, and Sadagorer Chasidim, so while they were filming in Israel,  it certainly might have been worth a side trip to Bnei Brak to see if any of them had anything to say.  Furthermore, when talking about Chasidim and Chasidic music, one might argue that speaking to a Reform rabbi and Reform cantor is a bit condescending, no matter what nice things they say (like only talking to white musicologist about African-American music).  It also would have been interesting, while in Sadagora, had they spoken to older residents about music, and seen if any of them recognized the song.   Things get better when they get to Israel and look at the way in which this Chasidic niggun became an Israeli song (although we found it annoying that the narrator pronounced “Moshe” like “Moshay).  Ultimately, though, whatever the merits or demerits of the Ukrainian and Israeli legs of our trip, Hava Nagila is more an essential part of Jewish Americana than anything else, and that’s where the documentary comes alive.

Whatever issues we had with the first half hour dissipated over the course of the second.  Grossman does a good job of tracing the trajectory of Hava Nagila, from inspirational Israeli triumphalism, through celebration of American Jewry, to self-important music-snob rejectionism, through kitschy appreciation, to big fat future question mark, all along the way giving a nice look at all the players, Jewish and otherwise, big stars and bar mitzvah boys, who made Hava Nagila the most readily recognized and beloved Jewish song in the world.  Jewdar’s one real problem with the second half is that while recognizing that Hava Nagila is not what it was to American Jewry (which, in turn,with waves of immigration from Israel and Russia, is itself not what it was), the only voices we hear are from experts.

If Hava Nagila was anything, it was the anthem of a particular type and generation of American Jewry, and in evaluating what it still means to American Jews, it might have been useful to have spent less time talking to Lawrence Kushner, Zalman Schachter-Shalomi, and Henry Sapoznik, and more time talking to regular Jews on the street (or in the deli, or the falafel place, or a  Heeb-sponsored event–really would it have killed them to put us in there?) about what this important part of our collective American Jewish patrimony means to them.

Which brings us back to our promise to revisit the issue of the film and the subject’s intimacy.  Hava Nagila really is a magical part of the American Jewish experience, and one that most of us who grew up here can lay some claim to.  That means that we’re all, on some level, going to feel a certain amount of ownership, and hence, expertise.  Inevitably, in a movie like this, the filmmaker is going to think she knows who to talk to about it, make personal pronouncements and give them the air of authority, and present the subject matter in a way that makes it recognizable to them.  The problem, in that regard, becomes less about the choices made by the filmmaker, than the fact that the viewer is going to feel the same way.   Jewdar might not like all the choices that were made (Come on, you couldn’t have asked Regina Spektor where her mother learned Hava Nagila?).  But part of the magic of Hava Nagila is that Roberta Grossman has an absolute right as an American Jew to make a movie not just about Hava Nagila, but about her Hava Nagila.  And if there are some nudniks out there who think that there remains what to say about it, Jewdar would be just as happy to sit through the sequel, and isn’t that the best thing you can say about a movie?