Happy Birthday to the King of Kings

The internet this morning was all abuzz (somewhat rightfully so) over David Bowie’s birthday, and the accompanying news of a new Bowie album – his first in a decade – teased by a new uber-German single, and music video.  That’s all well and good, except it ended up sucking the oxygen from today’s real rock and roll birthday – That of the one and only king of rock and roll: Elvis Aaron Presley. He would have been 78 today.

While Elvis’ semitic bona fides are somewhat murky (although, Tablet’s Adam Chandler made a strong case for them a few months back), there’s no question he was at least peripherally involved in Jewish life, both as a “shabbos goy” growing up, and dabbling in Hebrew in his later, fatter years (see below). And hey, if Elvis wasn’t Jewish, at least the man who dressed him was.

So, Elvis, the sorta-maybe-we-hope-Jewish king of rock and roll, we say to you: Thank ya. Thankyaverymush. 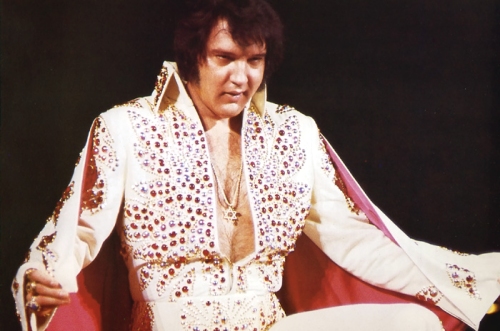