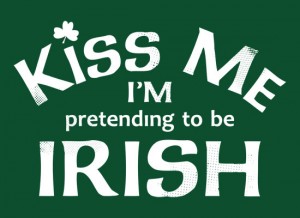 St. Paddy’s Day is tomorrow! It’s the day I always like to pretend I’m Irish, because my pasty complexion and orangey locks allow me to do so. You know what else they allow me to do? Feel things in ways the rest of you non-gingies can’t.

That’s because as it turns out, we redheads process pain differently from our more melanin-possessing counterparts. As recently reported in the Genetics section of io9.com:

“There is also a growing body of evidence that suggests folks with the redhead phenotype actually experience pain differently than the rest of us.”

Well, duh. What else would you expect from a set of genetic mutations? (That, for the record, is  not a self-deprecating insult. We Ginjews are actual mutants, scientifically speaking.)

My personal theory is that the emotional pain we suffer eventually translates into something physical. After spending our middle school years being called so many uncreative synonyms for “carrot top” (which never made sense, because the tops of carrots are green, dammit!), and our high school and college years being nicknamed “clown pussy” (I don’t know the euphemism of preference for the ginger penis), that pain transforms into something we can feel in a very real, very physical way. You spend years cutting us with your words and judgmental stares, and now you’re surprised that it hurts us more than it does you when you cut us with an actual knife?

I’m sure my explanation doesn’t agree with those of actual “scientists,” but they’re probably a bunch of brunettes and blondies–bottle jobs at best. You haven’t felt my pain, so don’t try to explain it! And why the sudden interest in red-head receptors? By the time you’ve settled this matter, we’ll probably all be extinct, anyway.