Ghetto Mishpucha: A Crypto-Jew and the Birth of Hip Hop 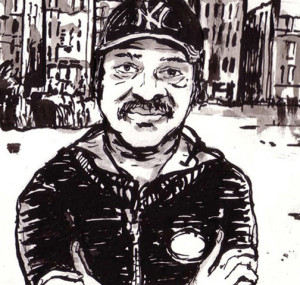 Since arriving in the U.S. from Germany 10 years ago, journalist / photographer Julian Voloj has been peering publicly into numerous nooks and crannies of Jewish cultural life. He documented traces of vanished Jewish life in NYC in his exhibit Forgotten Heritage, explored the diversity of devotion in Black Jews: Another House of God, and perhaps most notoriously, gave his voice to a Russian Gangster in Grand Theft Auto 4.
His latest work is Warrior/Peacemaker, a promising graphic novel-in-progress with art by Claudia Ahlering, currently on display at the Columbia/Barnard Kraft Center, in an exhibition curated by Yona Verwer, President of the Jewish Art Salon.

Crypto-Jews and the birth of breakdancing, that’s quite a combo! How does it all connect in Warrior/Peacemaker?

It’s a true story, a non-fiction graphic novel set in New York in the late 60s/early 70s, based on the life of Benjamin Melendez, a Puerto Rican immigrant and founder of the Ghetto Brothers — both the gang and the music group.  In 1971, he initiated the Hoe Avenue Peace Meeting and negotiated a gang truce that sowed the seeds for break dancing, graffiti, and hip-hop. While he was making history, he found out his parents, who suspiciously lit candles on Friday nights, were “Crypto-Jews” and he decided to reclaim his religious roots. 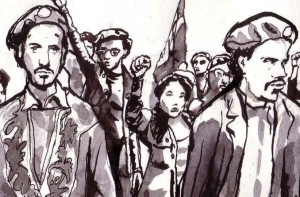 Your journalism background must have come in handy in this project…

Yes, I conducted dozens of interviews with Benjamin and other former activists, gang members, and hip hop pioneers.

The Hoe Avenue Peace Meeting was a huge deal. What’s its significance?

In December 1971, Black Benjie, a member of the Ghetto Brothers, was killed trying to mediate a dispute between two other gangs. The city was at the edge of bankruptcy, and especially in the Bronx, violence ruled the streets. When Black Benjie died, everyone feared the situation would escalate. Melendez worked to make the opposite happen. He invited the South Bronx gangs to meet at a gym on Hoe Avenue, and they decided, in true happy ending-style, that instead of fighting each other, they should together address the social injustices they were all up against day in and day out.

How did this help lead to the birth of hip hop?

Because of the truce, gang members could enter each other’s turf and not get beaten up. Instead of fighting, they showed off dance moves combined with martial arts in dancefloor battles, later called break dance. Africa Bambaataa, a Peace Summit participant and the Godfather of Hip Hop, converted the Black Spades, another South Bronx gang, into the Universal Zulu Nation, an international hip hop awareness group.

How did Melendez discover that he was not only a member of a gang, but also of a tribe?

Melendez realized his parents’ strange traditions — his mother lighting candles on Friday nights, his father meditating / reciting prayers under a bed-sheet — were actually Jewish.  A teacher of his, a Jewish woman from Greenwich Village, encouraged him to explore his roots, and after the truce he joined one of the last synagogues of the South Bronx, the Intervale Jewish Center, and started his process of returning to Judaism.

An example how life is often stranger than fiction…

Indeed, and what could be more quintessential New York than a Puerto Rican Jew paving the way for hip hop in the Bronx?

How did you meet Melendez?

I’m ever on the lookout for strange Jewish stories. When I read about Melendez, I had to meet him. We hit it off.  He gave me a tour of former Ghetto Brother turf, showed me the spot where his friend Black Benjie was murdered, and took me to the now-abandoned synagogue he prayed in. 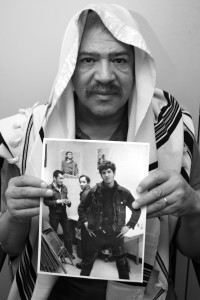 How did this all become a graphic novel?

After I shot his portrait [above], we stayed in touch and became friends. I found him super charismatic, nice, and full of incredible anecdotes.  I wanted him to get the credit he deserves for what he did, and given the very visual subject, I thought a graphic novel ideal.

Were you always into graphic novels?

My favorite comic growing up in Germany was the Belgian classic, Tintin, but I also loved Lucky Luke and Asterix. As a teenager, I got into American “serious” comics by way of Frank Miller’s The Dark Knight Returns, Art Spiegelman’s Maus, and Alan Moore’s Watchmen. Over the past few years, I read a lot of Harvey Pekar’s autobiographical graphic novels, and particularly enjoyed the posthumously published Cleveland.

The art in Warrior/Peacemaker is very atmospheric. How did you choose who would illustrate?

Claudia Ahlering is an old friend from Germany. I edited a Yiddish-German edition of Yitzhak Katzenelson’s poetry, and asked her to do an illustration, which I thought was fabulous. After working together once and being so impressed with the results, I knew she’d be able to bring the images I had in my head onto paper.

Where did the title come from?

It is widely believed that Melendez inspired the Cyrus character (“Can you dig it?”) in the cult film The Warriors, and at the same time, Melendez is truly a peacemaker.
—