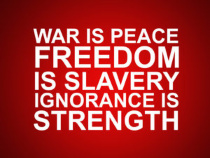 Remember how not long ago Europeans were up in arms over the notion that free speech might be infringed upon by extremists?  Well, what a difference a few weeks makes. It’s been a few years in the making, but some European Jews and the People Who Love them are pushing to make expressions of antisemitism and other bias illegal. There is so much to work with here. First of all, of course, is the sheer ludicrousness of the notion that you can ban or penalize prejudice. Jewdar is going to veer off in a weird direction here, but there is something extra perverse about Jewish organizations seeking a policy which is in a way, strangely Christian. By that, Jewdar means that while historically, Judaism focused on actions, Christianity focused on belief–the notion that one is just as liable for lust as for adultery isn’t part of our baggage, nor is the notion that all your actions are meaningless if you don’t have faith. We all entertain ideas and occasional expressions of prejudice; I’d had to think that we can be penalized of that. Especially, of course, because “prejudice” is in the eye of the beholder, and Jewdar has lived long enough in the Orthodox world to know that we have a very different definition of antisemitism from a lot of the people at the kiddush herring table.

Now, based on this article, we don’t know what exactly banning antisemitism will look like, but we have to assume that it’s going to be absurd, invasive and oppressive. We in the USA are justifiably proud of our whole first amendment thing–If freedom of speech is laudable, and most readers would doubtlessly agree that it is, then laws like those being proposed in Europe shouldn’t be a cause to celebrate, they should be a source of embarrassment.

The second issue is that the advocates of these laws, seemingly without any self-awareness whatsoever, are calling for oppressive laws in the name of “tolerance.” As they put it, completely without irony:

“There is no need to be tolerant to the intolerant. This is especially important as far as freedom of expression is concerned: that freedom must not be abused to defame other groups.”

“There is no need to be tolerant of the intolerant.” Sounds like a good principle, but–and just a thought here–might that not apply to laws like this? What is the real “intolerance?” Painting antisemitic graffiti on a wall, or applying the powers of the state to arrest those people who express unpopular views?

Finally, there is the matter that the law, of course, applies to more than just antisemitism. According to the article, it would apply criminal penalties to anyone engaging in “group libel,” which includes the following explanatory note:

This, of course, is so broad as to leave almost any discussion of culture or history potentially criminal. And, of course, brings us to a debate on the meaning of language which Jewdar might say is positively Talmudic if we weren’t afraid it would get us arrested in Europe. Some people might argue that the statement “Moslems are terrorists” is bigotry that should be banned, but what about “Muslim terrorism” or “Arab terrorism?” Would a suggestion that some terrorism is rooted in Islam be criminal? What if somebody, in a discussion about the Arab-Israeli conflict, made an unfortunate reference to “Jews” instead of “Israelis?”  What if someone were to condemn “German mass murderers” instead of “Nazi mass murderers?”

And that brings us to the final point. Defenders of such laws might point to the unique history of Jews in Europe as an argument as to why one should be extra-sensitive to manifestations of antisemitism. Fair to a point, but one might point to that same history to argue that Jews might be a little more cognizant of the ease with which such laws can be turned against us. It shouldn’t require too much imagination to foresee the time when somebody will take a look at the last few thousand years of Jewish literature, both religious and secular, and find some texts which are problematic. Hell, if Jewdar finds the phrase “Righteous Gentile” to be unbelievably offensive, we can only imagine that some gentiles might take umbrage at the notion that the only way they can be viewed as righteous is to save a Jew’s life.  Would this law allow penalties to levied against Yad Vashem?

Once you light the petard, you never really know when it’s going to go off, or who is going to be hoisted. And while we don’t think this law will go anywhere, Jewdar knows where we stand on the issue of whether or not people should be allowed to be offensive.  Je Suis Heeb.