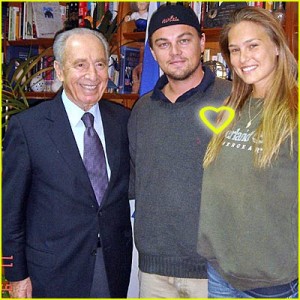 We’re not really sure when the last time anybody actually stopped presses, but if that sort of thing is ever still done, now’s the time. According to the word on the street, Leonardo Dicaprio may be set to join the ranks of such luminaries as Ike Turner, Nell Carter, and Sammy Davis Jr. No, he’s not becoming black, sillies—he’s contemplating converting!

According to assorted online yentas, things are getting sufficiently serious between Leonardo and former Heeb-covergirl Bar Refaeli(pictured above with Lauren Bacall’s cousin Shimon) that not only is Leo (“Leo” makes him sound a lot more like a Member of the Tribe than “Leonardo.”) shopping for Israeli real estate, but he may be shopping around for a conversion as well (please note: Jewdar isn’t saying it is happening, only that it may be happening).

It will be fascinating to see if Israel’s notoriously choosy Chief Rabbinate will be swayed by the Academy Award winner (maybe he’ll get consideration in exchange for endorsing a line of black hats, or doing a PSA about the dangers of mixing meat and milk). We would like to offer a (perhaps premature) welcome to the Tribe to Leo. While some less sophisticated observers might take an opportunity like this to make a joke about the fact that the (presumably) circumcised Dicaprio will still have his penis pricked to have some blood drawn, Jewdar feels that having spent years in Hollywood, Leo has no shortage of experience dealing with short, aggravating, Jewish pricks.