I’ve always thought of actor David Duchovny as someone who must have a tremendous measure of raw magnetism in person, but it’s the sort of magnetism that is as overpowering for casting agents as it is untranslatable to film. We regularly see Duchovny, along with other actors (Keanu, that’s you buddy) and actress (Katie Holmes, how’ve you been lately?) of this sort, placed in roles which – in an audition room – must have seemed like sure-fire hits, but come off flat and robotic on the big screen.

So, when David announced the other month that he was trying his hand at writing for a bit I was skeptical, but optimistic. It’s always good to diversify and try new things, right? [EDIT: As one astute reader points out, Duchovny’s actually been working on a PhD in English Lit. from Yale. Not that an unfinished doctoral thesis an author makes, but okay, fine, so he’s not starting from scratch here]

Weeeeeeell, after reading a little more about Duchovny’s upcoming self-described “fable,” I’m convinced that his foray into literature isn’t simply going to be good, it’s going to be great. Hell, more than great. It’ll be a watershed moment for literature. It will – literally – bring about peace between Israel and Palestine.

From the official book description for “Holy Cow: A Modern-Day Dairy Tale“:

Elsie Bovary is a cow, and a pretty happy one at that — her long, lazy days are spent eating, napping, and chatting with her best friend, Mallory. One night, Elsie and Mallory sneak out of their pasture; but while Mallory is interested in flirting with the neighboring bulls, Elsie finds herself drawn to the farmhouse. Through the window, she sees the farmer’s family gathered around a bright Box God — and what the Box God reveals about something called an “industrial meat farm” shakes Elsie’s understanding of her world to its core.

There’s only one solution: escape to a better, safer world. And so a motley crew is formed: Elsie; Jerry — excuse me, Shalom — a cranky, Torah-reading pig who’s recently converted to Judaism; and Tom, a suave (in his own mind, at least) turkey who can’t fly, but who can work an iPhone with his beak. Toting stolen passports and slapdash human disguises, they head for the airport.

Elsie is our wise-cracking, pop-culture-reference-dropping, slyly witty narrator; Tom — who does eventually learn to fly (sort of) — dispenses psychiatric advice in a fake German accent; and Shalom, rejected by his adopted people in Jerusalem, ends up unexpectedly uniting Israelis and Palestinians. David Duchovny’s charismatic creatures point the way toward a mutual understanding and acceptance that the world desperately needs.

Yes, a pig that converts to Judaism brings peace to the Middle East. Keep in mind, we’re not talking about a children’s picture book here. “Holy Cow: A Modern-Day Dairy Tale” is 160 pages.

Screw “Animal Farm,” this deserves the Nobel prize for literature.

And if, by some crazy stroke of luck, this gets turned into a movie? Well, we’ve got just the pig for the role: 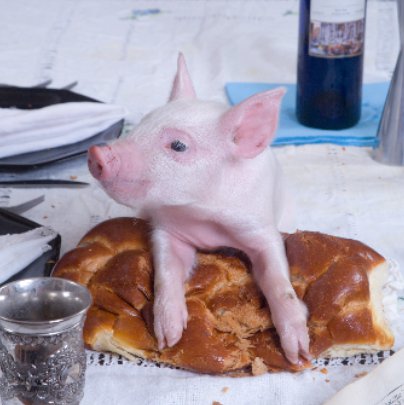 Our Jewdar had to ask his Rabbi if this was kosher