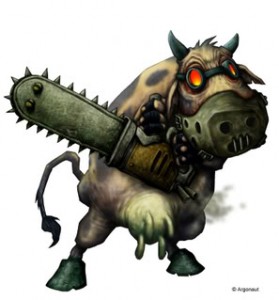 The cow broke off from a herd grazing near the “Big Shopping Center” in Nesher. According to Magen David Adom paramedic Kobi Ben-Haim, It took over an hour to remove the bovine from the center. In that hour the cow hit a woman on her back, injuring her lightly, and struck several cars that got in the way.

“The incident could have ended in disaster,” Ben-Haim said, “‘People saw death flash before their eyes.”

As of now the cow does not appear to be personally tied to any terrorist cells but its owner is being questioned.