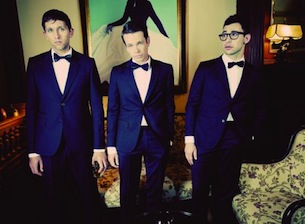 There’s a good chance that today you’ve heard “toooooo-naaaaaahhhh-aaaahhhh-ahhhh-eeeeyyyttt, weeee are young,” in some capacity, whether actively or passively (you also probably just sang along to those words while reading them). Because the undeniable hit single by the New York band fun. has been the singular song that we, the Universe, have all seemingly come to embrace as an undeniable smash.

Since “We Are Young” was released on September 20th, 2011, it has steadily disarmed the susceptible and cynics alike and bequeathed 2012 with it’s very own “We Are the Champions.” But the thing about this song–while it’s admittedly great– is that it comes from an album of equal charm. Some Nights, the indie-pop’s sophomore release, is an amalgamation of glam’s bombast, the winkiness of bubblegum pop, and enough Auto-Tuned guilty pleasure to fill a whole episode of Glee (or at least, one song’s worth).

Heeb caught up with Jack Antonoff, guitarist and vocalist of fun. to talk about his Jewish identity, his admirably vocal support for the LGBT community, and, of course, that song you’re inadvertently humming to yourself right now.

Jack, where are you?
Omaha, Nebraska. We’re playing here tonight.

How did your touring change after having become a band with a hit single?
We’re not a band that came out of nowhere. We toured behind our first record and sold pretty reasonably, like selling tickets for shows with a pretty good attendence. You know, we’ve been on the road so long that I feel kind of detached from the insanity surrounding fun. I’ve only heard “We Are Young” on the radio, like once.

I don’t believe you. I hear that song in my sleep.
[Laughs]

You knew you had a hit on your hands when it was done, right?
Well, when we wrote music and made the record, there was no part of us that wanted to write a radio-friendly album. It just so happens to be that the style in which we recorded Some Nights also happens to be the type of sound of the songs on radio. We’ve been in bands so long with only a devoted smallish fan-base that thinking it would go beyond that…? Didn’t really register.

We need to talk about the Auto-Tune on the record. Because, well…AutoTune?
But it’s just like using a guitar pedal. People have this association because it’s often used to make someone’s voice sound better. But really, it just changes the style of the sound. It’s not like (singer) Nate [Ruess] sings like shit and we were using Auto-Tune to cover up the imperfections. Everyone knows he’s got a great voice. We thought it felt better overall and we had a good time messing around with it.

How different is it touring with non-Jews than it is with Jews? Because fun. unlike your own band Steel Train, is heavy on the Gentiles.
I think all the stereotypes about us are true. I think there’s a Jewish perspective on life that’s rather unique, which I find fairly beautiful and some people find completely annoying…it’s like an in-built skepticism. I’m also looking at scenarios from just about every angle and sometimes thinking about how things could go wrong.

What did you do for Passover?
I didn’t do anything unfortunately. I meant to go to a cousin in Denver but my whole days are booked from morning to night.

Your sister Rachel Antonoff is also exceptionally talented and having some success as a designer. It’s rare when two children succeed in pursuit of the liberal arts. At least one of you would be a lawyer.
There were many moments in the past decade when we didn’t know what we were doing and whether it would work out, but our parents were always supportive. And having grown up in a Jewish community, there were friends who went off to college like Cornell and they would talk, ask what’s up with Jack? Oh, he’s in a band now. That sort of thing, you know. Like, still in a band.

You went to Solomon Schecter Day School until the 8th Grade. Where did you wind up after that?
I went to public school but hated it because I was tortured there. Eventually I transferred into a private school on the Upper West Side.

What happened at public school?
I was tortured in public school for being gay when I wasn’t even gay. And I think that experience and my firsthand exposure to homophobia made me really passionate about supporting the gay community. I couldn’t stand the intolerance. It really upset me to the point where I couldn’t do it any more. And going to school on the Upper West Side…I met kids who were into art and music. I was one of the only few straight kids in the class.

I have to ask if you’re being Jewish makes you empathize with being a minority or being an outsider?
I can’t say it’s not part of it. I think first and foremost any human being should feel passionate about this [cause]. But being Jewish, being raised with the concept of the Holocaust, there is a part of me that always feels like an outcast and I feel compelled to help outcasts, too.

On a lighter note, there’s a blog out there called “F*** Yeah, Jack Antonoff.”
[Laughs] My mom looks at all that stuff. She’s brought my attention to some of these things.

It’s a pretty comprehensive site with photos and information practically from your day-to-day. Are you an indie rock sex symbol?
Um…I think you’re more qualified to answer that than I am. Glasses are maybe cooler than they used to be…?

There’s a difference between identifying as a Jew, or identifying with the Jewish religion. How do you identify?
Yeah, there’s a gigantic difference between the race and religion. I don’t think I could be more culturally proud of being Jewish. Religiously, though, there are a lot of things in Judaism, the religion, that I still have a very hard time with. Especially in the Orthodox world.

What it is like to watch a room full of 1,000 people sing along with the words to your song in an anthemic way?
It’s really the best feeling. It’s the one instance in my life when I really feel like its the most perfect moment of being in a band. It’s a terrifying thing to also think about how everyone is connecting to this one song that you’re partially responsible for. I don’t know how many people get to experience something like that so I’m thankful we’re getting our shot.

“We Are Young” is so deceivingly positive. It’s misconstrued as an anthem for the young to experience a life of good times, but it’s actually about being wasted and acting like a total a-hole.
That’s one of the cool things about it…that people are taking from it what they want. Once you record it and release it, it’s not yours any more. You have to be okay with people getting it wrong.

By the way, I totally play Some Nights for our 18-month-year old during bath time. Like, often. He’s into it. I’d say your album definitely inspires splashing.
That’s pretty cool. He’s probably responding to the rhythmic nature of the record…but I guess it’s never too early to win over a fan.