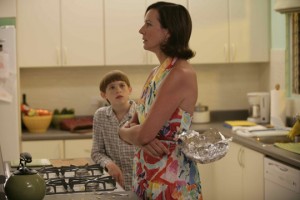 A pedophile, a Bar Mitzvah boy and a serial widow are just a few of the colorful characters that populate Todd Solondz’s brilliant dark comedy, Life During Wartime. It is high in the running for the best film I’ve seen this year, and not only because it features a naked Allison Janney (doing the nasty with Godzilla’s Mayor Ebert, no less). With subtle hints of magical realism and the classiest perwinkle suit you’re bound to see this year, Wartime is a small, talky picture that digs into your flesh and refuses to let go.

The ensemble film centers on the experience of Timmy (Dylan Riley Snyder), a 12-year old  looking forward to becoming the man of the house at the age of thirteen. His mother, Trish (Allison Janney), is desperately seeking Jewish companionship, which she finds in Harvey (Michael Lerner). Trish’s sister, Joy (Shirley Henderson) is in for an extended visit after her ex-con boyfriend (Michael K. Williams) reverts to making pervy crank calls. Meanwhile, Timmy’s presumed-dead father (Ciarán Hinds) has just been released from prison, and is on a mission to be as much of a creep as possible all over town. There’s more, much more actually, but this is a character driven film, so there is no great way to describe the plot, a fact which works only to Wartime’s advantage.

Solondz’s sick humor reminds me of the films of the Joel and Ethan Coen, specifically Fargo. If that film is a dark comedy, then Wartime is black as night. In the former, the laughs are physical, gruesome; we laugh because we are discomfited by watching bumbling killers, the absurdity of seeing a human foot shoved desperately into a wood chipper. With Solondz, the laughs come from an even darker place. Without any disfigurement or brutality, he is able to access a place inside each of us that can laugh at peophilia, giggle at suicide and take Paul Rubens seriously. Frightening stuff.

And while we’re on the subject of the Coens, I’d be remiss if I didn’t bring up the perceived overlap between this film and A Serious Man. Both are about the tumultuous time leading up to a Bar Mitzvah, both spend a great deal of time focusing on a single philosophical sticking point (“forgive and forget” replaces “Schrödinger’s Cat”), and both end well before you want them to. Also, both feature Michael Lerner. What do the similarities mean? Well, sometimes, as viewers, we just get lucky–in this case, three preeminent Jewish filmmakers working out similar demons upon similar canvases.

In one of Wartime‘s many revealing scenes, Trish and Harvey discuss their possible future on their first date. Clutching the Chai around her neck, Trish asks “Have you ever been to Israel?” “No,” and with a wonderfully subtle I-want-to-get-laid-tonight glint in his eyes, Harvey fires back, “But I want to be buried there.” This comment gets Trish “Wet…” (awkward beat) “all over.”

The fact that we don’t know whether Harvey is a huckster or a true believer is the kind of ambiguity that makes Life During Wartime such a rich film. Every word must be digested and interpreted; no moment is wasted. So much is revealed about each character with every inch of every frame, yet the weight of the material never brings you down.