Chosen Comics: The Art of War 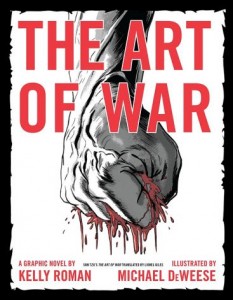 Like Achashverosh, Jewdar periodically looks into his book, and find people who merit some notice.  And sometimes, those people hock us a bit.  Back a few months ago, we were asked if we would review a graphic novel The Art of War.  We got the review copy, read it, saw that it wasn’t supposed to be out until August, and then promptly got distracted.  Then last week, as if by magic, another copy appeared in our mail.  As Elul is a good time to review our transgressions, it seemed like a hint we should take.

At first, we thought that this would simply be some sort of artsy graphic version of Sun Tzu’s classic military treatise.  And when it arrived on our doorstep we were a bit skeptical.  While it wasn’t just a retelling of  Sun Tzu, it was in black and white.  We’ll admit it, when it comes to comic books, by and large, Jewdar is still 12, and while there are the exceptions that prove the rule (Love and Rockets, Sin City, and Cerebus come to mind), by and large, we are of the opinion that if you make a comic book, it should be in color.  And if it isn’t, you’ve really got to prove it’s worth to us.  So hat’s off to author Kelly Roman and artist Michael DeWeese (don’t worry, we still have our yarmulke on), you did your job.

The story is set in the not-so-distant future, a time of US military interventions, Chinese economic power, sinister multinational corporate intrigue, and science run amok (like we said, “not-so-distant.”)  The protagonist, Kelly Roman (okay, so author Roman gets docked some points for lack of originality) is a vet returning from military prison to a hometown ruined by corporate greed and a family coping with the mysterious death of his brother who worked for a sinister and mysterious multinational financial firm, led by a guy named Sun Tzu (we’ll cut Roman some slack on this one, since his name–and the fact that passages from The Art of War run like a Greek chorus through the book justify its title).  Without giving any spoilers, Roman goes to NYC to find out what happens to his brother, makes his way into the workings of the Trench Fund, and finds out all kinds of stuff while killing people along the way.

In conclusion, if you’re like many who read Heeb–self-righteous on the subject of the financial industry, suspicious of government, and prefer books with more pictures than words, The Art of War is definitely worth checking out.