Chelsea Peretti Talks TV, Twitter and What She Wants in a Boyfriend 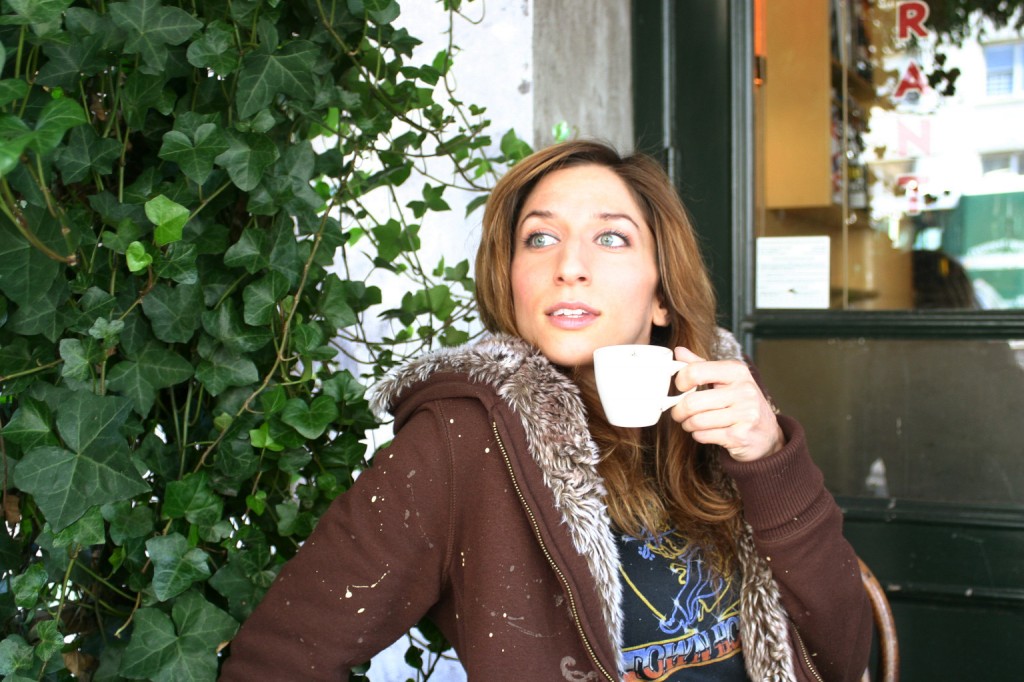 Chelsea Peretti is one of the greats. A comedian and Internet presence since the early aughts, her material is at once silly and dark (in her man-on-the-street web-series “Making Friends,” she explains nonchalantly that new pals are necessary because “90% of my friends just died in a van accident”). Peretti’s Jewish-Italian, a heritage conducive to comedy, but not so much to dressing up like a pretty princess for Halloween as a child, as she recalls in one standup bit. Quoth the neighbors: “Aww, are you Barbra Streisand?”

She’s currently Twitter famous and writes for Parks & Recreation. She has no pets, but she does have drawings of pets and sort of an awkward laugh.

Yeah I grew up in the Bay Area, so the last few years I was in New York I was kind of ready to go back to California.

How’d you get into comedy?

I did improv when I was younger and then in college I didn’t like the theater department – I went to Barnard – and my friend signed me up for an improv group at Columbia and I wound up doing that. Then after I graduated I was temping, and this lady was like “You should do standup,” and it wasn’t like it had been a lifelong dream of mine, this lady who I met temping just told me to do it. (laughs) And then I went with her and did it, and that was right out of college.

Just by coincidence I was reading The Bedwetter [Sarah Silverman’s book] for the first time a few weeks ago and there’s a picture of your hairclip on that guy’s dick – do you know what I’m talking about?

Yeah, that was pretty memorable.

There’s a whole section in the book of disgusting jokes that you played on each other in that writer’s room [for The Sarah Silverman Program]. Were there any other notable jokes or things you were involved in?

I think she wrote about the pregnancy test.

[from the book: “Chelsea Peretti took a pregnancy test on the first day of work and shared the pee-drenched results with us as it materialized.”]

I think like, the season before me there had been guys who pulled their balls out, but yeah, I don’t have balls to display so I just kind of had to rely on verbal jokes and stuff.

In your videos everything’s played pretty straight. Like I’d kind of believe some of those guys in All My Exes were actually your exes. And on Variety Shac it sometimes feels really loose and off-book. What’s it been like transitioning into more scripted, like “punchliney” comedy writing for Parks & Rec?

Well, Sarah kind of gave me her big break writing for her show, and being in that room was a really specific kind of culture, and this is a different one. I guess that Sarah was always in the room with us, so the star of the show was always in the room and one of the writers? Whereas Amy’s also in the room, just not every day, you know? I think with different shows you get a sense of the kind of culture of that show, like for example with Parks & Recreation, people go for cute moments, and sweet moments, and I don’t think with Sarah’s show that was much of a priority. I obviously love both the shows and I just think it takes a second to figure out what the vibe is. And in terms of my own taste, I’ve obviously done a fair amount of standup and things before these shows, and these jobs have been critically educational in showing me what other people’s tastes are. Like, even within a writing staff, people have different taste even if a show overall has one kind of a tone. So it’s been cool to survey the lay of the land.

There was a trend piece in the Times in like mid-November about female comedians breaking taboos which, to me, feels ridiculously late and also like a totally beaten to death subject. Jesus Is Magic for example came out in like 2006. Do you think it’s good or bad that people are still having the “women in comedy” discussion?

My comment about that is, I guess, people always ask “What is being a woman in comedy?” or “What is it like to be a women in comedy?” and I think on a really simple level it’s people asking about being a woman in comedy. If you’re in a guy in comedy no interviewer is gonna ask what that’s like. At the end of the day, if you’re funny and people laugh, it’s kind of that simple. And of course it’s a little different when there’s Internet comments, or even substantial media outlets, asking “Are women funny? Could they possibly have a joke or two up their sleeve?” and that can be demoralizing if you put weight on it, but you kind of have to go with what’s in front of you, which is, like, I have so many women in my life who have made me laugh from childhood until now. Both professional comedians and civilian, regular women. So for me it’s one of those ridiculous emperor’s new clothes-type news stories.

How do you decide what goes on your Twitter and what goes in your standup?

(laughs) Unfortunately, I could be a lot more selective. What I tend to do is just tweet a lot of stuff and then go back and delete stuff. I have constant Twitter regret and wind up deleting a bunch of shit. I’ll draft stuff and then if it still makes me laugh a couple days later I’ll maybe tweet it. But the truth of the matter is, if you’re on the road and you’re lonely at a shitty hotel and in a weird place in life, it’s so easy to over-tweet some, like, weird salvo. So I’m sure I could be more conservative about it.

One of my favorite Twitter accounts used to be Kat Stacks, I don’t know if you’re familiar with her, but she went to jail for immigration issues and she doesn’t tweet as much anymore, but she used to tweet every second of the day and it never bothered me. I feel guilty when I do high-volume tweets. But I think the people it annoys [most?] is generally other comedians. I don’t think my followers are bothered by it.

‘Cause I used to read her Twitter feed like it was a novel. I would scroll all the way to the beginning of the day and read all her shit. (laughs)

What do you want in a boyfriend? Five words.

This is hard because do I answer with my superficial side, or my dark side, or my evolved-as-a-human-being side?

You could do one each.

That’s good of you.

Well, that’s the same shit. Don’t cap me now, we’re just getting into it.

I think it’s okay if you get superficial at this point and just say “tall.”

You’re getting a screenplay vehicle. Like a starmaker. What’s the logline?

Uh, if I had one, I’d be running around Hollywood trying to pitch it. But if I was to write a screenplay for myself, what I’d want is… nothing where I’d have to put on a blazer and act like more of an adult than I am? Obviously it’s something I’ve been thinking about. I’d want it to have a lot of the things I’m obsessed with, like dogs or moving to the mountains, or escapism, or fantasy…

So Eat Pray Love, is what you’re saying.

Okay, I haven’t seen that, but for example, not that I would make this movie, but Miranda July’s first movie, Me And You And Everyone We Know, I thought that was okay. And a great first movie because it was very unique, and it felt very specifically hers, and that’s what I’d want my movie to be.

But with more black guys. Last thing: you know how at the top of interviews there’s a blurb like, “Chelsea Peretti has been very busy lately” or whatever, and a little thing about stuff you’ve done? Write me the first sentence of that, whatever you want, and I’ll write the rest around it and nobody’ll know until they get to this bottom part of the interview. It’ll be fun.

How about “Chelsea Peretti is one of the greats.”