Centurion is Reminiscent of That Time The Jews Kicked Roman Ass 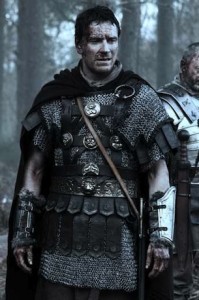 Neil Marshall’s Centurion is the story of a band of Roman soldiers left behind enemy lines in Northern Britain (modern day Scotland) after guerilla nomads known as the Picts bring an entire legion to its knees. Led by a beefy Michael Fassbender as Centurion Quintus Dias, the film opens in 117 CE, approximately the time that the Ninth Legion disappeared from the record books, possibly at the hands of these early Scots. This nationalistic hypothesis hearkens back to an uprising that would happen only two decades later, one that got the Romans out of Britain and their asses whooped (briefly) by the Jews: The Bar Kochba Revolt.

The story goes like this: around 132 CE, the Roman Emperor Hadrian decided to build a mosque, ahem… Temple to Apollo where the Hebrew temple twice stood. Without an Abe Foxman to chisel out a wordy op-ed in the Roman Post, Simon Bar Kochba came to power, kicking togas and taking names. His growing band of talmud scholars knocked an entire legion off the planet and took Jerusalem back for a brief period. Then Hadrian called in Sextus Julis Severus from Britain to send us packing, and now we all pass around blue boxes for JNF trying to put the pieces back together.

Rome was never able to take Britain. It was too far, too environmentally unstable and the natives proved tbe too good at cutting off soldiers’ heads – that’s why they get a movie and we don’t. No matter how exciting a Bar Kochba film could get, it is always going to end with the dispersion of the Jews and Rabbi Akiva’s face getting pulled off. Come to think of it, that sounds a lot like a film a raving anti-Semite won an Oscar for making. What was his name?

Overall, Centurion preaches an anti-war message. By the end Quintus Dias’s fight for survival puts him at odds with both nations, a pawn stuck between conquerors and the unconquerable. He realizes he is in a losing battle on rough terrain, up against a people who have no fear of death and every reason to fight. We can draw obvious parallels to modern travails in foreign policy, but I would argue that, like any hawkish lefty might say, the film is not anti-war but anti “this war”. Heads are sliced open, bodies explode, eyeballs are poked through, arms flung in every direction; the ravages of war never looked so awesome.

There is a glory to battle, sometimes a thankless one. Much like the Bar Kochba rebellion, Quintus Dias and the men of Centurion enjoy the minor spoils of combat, staying alive just long enough to see the whole thing come apart. Even though in the end the Romans killed over half a million Jews during our uprising, the fact that they cared, and perhaps halted plans to finish the British conquest, is something we can tuck under our Diasporic pillows at night. Handing Rome its ass is a pleasure few peoples have known. As the film rolls out, we learn that Rome has more important things to concern itself with than a far off mountainous island infested with warriors. Little do audiences know they still have the Jews to worry about…