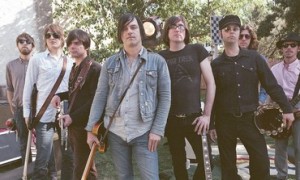 The Brian Jonestown Massacre, psychedelic indie rock revolutionaries around since the ’90s, referred to as both cult and band as documented in the 2004 film DIG! are playing at The Barby in Tel Aviv, July 11th.

Anton Newcombe has been playing shows with new musicians under the moniker BJM, but the original lineup of BJM including Matt Hollywood, bassist Will Carruthers (formerly of Spaceman 3 and Spiritualized), guitarists Jon Saemunder Audarson and Henrik Baldvin Bjornsson and drummer Constantine Karlis are back and on a world tour promoting their new album Aufheben, meaning both “to lift up” and “to abolish” in German. In an interview with the Jerusalem Post, Newcombe explained:

It’s a word with… to destroy and to preserve. If you think about German culture and relate it to the history of the last century, society had to destroy it to save and rebuild, as a way to preserve.

Newcombe now resides in Berlin, home to many Israeli expats. He has become familiar with Israeli culture and friendly with many Israelis through the Berlin art scene.

I follow the Israeli arts scene because, you know, to me it’s just the ‘arts scene,’ he said. “I think it’s great to be a part of any forward-thinking culture, and very important for the Jewish community to define itself in Berlin and Germany.

This line up of the original BJM also recently provided the theme song to the hit show Boardwalk Empire, Straight Up and Down off the 1996 album Take It From the Man. Nothing like television to bring people back together. DIG! the documentary has also been in rotation on Israeli cable for years.

The July 11th Tel Aviv show kicks off the 3rd European leg of the tour. They just finished the West Coast of the USA and Australia and have a show in Berlin July 12th. They’ll be back for the East coast on August 25th at Webster Hall in NYC.

BJM world tour dates are up on their site:

Aufheben, the album is currently available for streaming on Soundcloud.

Details on the Tel Aviv show: