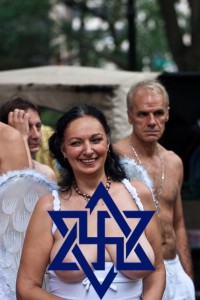 This past Sunday was the National Go Topless Protest, a day in which women are encouraged to bare their goodies in the name of “equality between men and women…being topless in public.” Some states don’t allow women to let their nips fly, and the protest aims to change that. Sounds all well and good, but who exactly is behind this mammary-freeing scheme? Why, none other than the extra-terrestrial worshiping Raëlians, whose symbol is a swastika intertwined with a Jewish Star.

Diabolical is a word that comes to mind when thinking of this unique alliance. Genius is another. If you’re hurting for membership, then tits would seem a grand way into the hearts and minds of hippies and tightwads alike. Liberated women can fight for a cause that their straight-laced sistren will probably never take advantage of, and couldn’t-give-a-shit folk get to snag a nice peep on the way to work. All the while, you are being sucked into leader Raël’s dubious “new religion”.

And about that swastika Star of David thingy. Apparently they have decided to ‘take back’ the swastika, returning to it its original peaceful implications which were destroyed by the Nazis. The Nazis also ruined the toothbrush mustache, but I’m yet to see a group try to reclaim that as forcefully, let alone toss it in the middle of a Jewish star. So if you saw some boobage on Sunday, consider it a mixed blessing of sorts. On the one hand: free peek for your pervy side/let your constitutional feminism shine through. On the other: giving an extra inch to a symbol-twisting, UFO-loving, former-racecar-journalist religious leader. This movement gets a big kacha-kacha.

(You can check out photos of the NYC topless event from Flickr user ennuipoetry here. The photo above was pulled from it.)