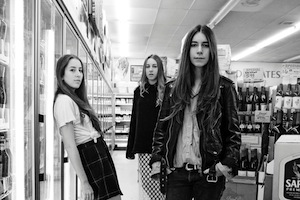 1. HAIM – Days Are Gone
When I first saw Haim perform live, they plainly introduced themselves as “three Jewish girls from the Valley.” But after their brief 30-minute set, sisters Este, Danielle, and Alana Haim (pronounced “hah-yim”) proved themselves to be so much more. They’re charismatic mid-song banterers, proficient instrumentalists, stage owners, skilled song crafters, models of East Village chic, and purveyors of new wave sophistication.

But enough about the live show experience. Let’s get to the debut Days Are Gone which I’m anointing my favorite album of 5773. Expertly polished by indie super producer  (and also Jew) Ariel Rechtshaid, these eleven tracks are influenced in equal parts by Prince and Fleetwood Mac which means its slightly funky like the former, impossibly lithe like the latter and  utterly timeless like the both of ’em.

The video for the stand-out track “The Wire”–which, no, is not about a David Simon TV series–features the Haim ladies breaking the respective hearts of three guys, which is appropriate considering breaking hearts is the sort of thing they’ll do on a nightly basis on tour; Haim will take the stage, you the audience will fall in love, and then they’ll leave you for another city. It’s a cruel cycle but at least you had the night together with three Jewish girls from the Valley.
FUN FACT: Most gentiles mispronounce the band’s name “haym” or “hyme.”

2. Autre Ne Veut – Anxiety
Miguel. Justin Timberlake. Robin Thicke. And then Justin Timberlake some more. In a year when there was plenty of croon to swoon over, Brooklyn’s Arthur Ashin truly moved me, if not with his earnest bedroom jam “Play By Play” alone. I can’t believe he’s not guesting on hip-hop mixtapes already.

3. Vampire Weekend – Modern Vampires of the City
Remember way back in 5767 when we interviewed these young upstarts? Well, we’ve been on board since the beginning, which makes this new batch of prep-pop feel a little bit like a vindication. It also seems that while we were busy calling Paul Simon fouls, these boys became men and made a record which accomplishes the incredible feat of maintaining its youthful following, while still espousing on the relatable sentiments of getting older. As frontman Ezra Koeng sings on “Step,” “The gloves are off/ The wisdom teeth are out.”

4. Disclosure – Settle
Settle is referential as hell to Detroit techno and British club music but then again, this homage released by young’un brothers Guy and Howard Lawrence is also so reverential it sounds as authentic and urgent as the music made by this duo’s predecessors. These guys are barely in their 20’s which means, talent-wise, we’re only scratching the surface here.

5. Laura Mvula – Sing to the Moon
At once evocative and brainy, this British vocalist crafted an orchestral pop/folk/soul amalgamation unlike anything I’ve heard of late; it’s almost as if Lauryn Hill remerged as the frontwoman for an Incredible String Band cover band. And I know that her label has hopes of Mvula finding favor among the Adele devotees, but to be frank, this stuff’s too smart for Nicholas Sparks movie trailers.

6. Bastille – Bad Blood
Caveat: I once wrote an article in defense of Coldplay. You should know this. Which means I also have no problem when a group of British men feel compelled to get together and make an album of–yes–overwrought but, nonetheless, evocative music. It’s even possible, in this instance, that songwriter and frontman Dan Smith may have even employed adjectives like “sweeping,” “emotional” and “bombast” during the recording process. But put your snobbery aside for a moment, try to forget that I even said “Coldplay” and as my homie George Michael said, listen without prejudice.

7. CHVRCHES – The Bones Of What You Believe
Synthesizers are synthetic in nature. Hence, the name “synthesizer.” Duh, I know. But the thing is that when most synth bands try to make their music sound substantive and humanistic despite employing vintage Casios, the sentiment often comes across as plastic and artificial. Scottish trio CHVRCHES, though, have learned how to infuse pain, heartbreak, longing, and disappointment into an album that could have ended up sounding like an emo Aqua, but that’s mostly due in part to Lauren Mayberry’s vulnerable, porcelain voice.

8. Kanye West – Yeezus
Yeezy put out his most sonically provocative album in a time when his personal life couldn’t get any more conventional or mainstream. Hooking up with a Kardashian? Having a baby with said Kardashian? Appearing on an E! reality show regularly starting all the Kardashians? But then he delivers a curveball like “Black Skinhead” and, well, all is forgiven.

9. Nine Inch Nails – Hesitation Marks
I know what you’re thinking. I also never expected for Trent Reznor to revive his dormant industrial rock project and deliver his strongest album since 1994’s The Downward Spiral. But incredibly, after winning an Oscar, getting married and seeking creative fulfillment through a number of side projects, it happened. NIN came back from a three year hiatus with a record of dependably angsty songs, but this time something was palpably different; Reznor learned that being angry doesn’t necessarily mean yelling all the time. There’s a potency in the middle aged dread.

[POSTSCRIPT: Inevitably someone will complain in the comment section about a lack of  traditional”rock music” in my choices. It happens every year, and I expect it to happen again this year. But this time, I will preemptively address this inexplicable lament. Rock and roll, in the traditional sense, has lost some of its luster in comparison to the incredible progress being made in hip-hop and pop music. It’s an amazing time to be open to new genres and new sounds, which means it’s also a great time to let go of our conventional tastes. That being said, I think Nine Inch Nails, Haim and Vampire Weekend are rock bands. So there’s that.]