Behold The Borscht Ball: KulturfestNYC is Back 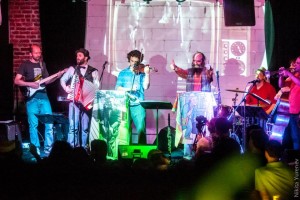 Last year, HEEB covered the National Yiddish Theatre Folksbiene’s (NYTF) first KulturfestNYC, a week-long cultural Jewpalooza. For 2016, NYTF with its partners The Museum of Jewish Heritage, UJA Federation of NY & Capital One, have kicked it up to a three month summer-long Jewish performing arts festival full of concerts, plays, conversations, and events for kids, as well as an epic remounting of the Folksbiene’s hit revival of the lost Yiddish operetta The Golden Bride opening July 4 with a bang and a BBQ. Heeb-chosen fest highlights include a free allstar cantors-meet-chassids-meet-The-Maccabeats concert at SummerStage (6/15), slammin’ Joe’s Pub shows like Daniel Kahn & The Brothers Nazaroff (6/17) and klezmer jazz genius Frank London and singer Eleanor Reissa’s A VILDE MIKHAYE! (6/20), a Papa’s Day Fiddler On The Roof Sing-A-Long (6/19), and Tararam – Israel’s answer to Stomp (8/7).

So what could possibly top Borscht Ball 2015, by all accounts a rowdy Russian-flavored sold-out success?

For starters, instead of “members-of,” this year we actually have The Klezmatics in full, about as badass a house band as I could imagine! They’ll be on stage for the evening’s “Act One,” performing alongside such stars as the wild and wizardly Psoy Korolenko together with Daniel Khan, Annette Ezekiel Kogan of Golem, Belarussian clarinetist Dmitri ‘Zisl’ Slepovitch, and the Moscow-based Vanya Zhuk. Svetlana & The Easters Blokhedz take over for “Act Two,” and then our headliner OPA, from St. Petersburg, takes the stage. Their music — I can’t say it better than their bio, “expresses the freedom and euphoria of post-Soviet spirit and ancient enigma of Russian Soul.” So they’ll get us dancing all the way to a jam session extravaganza with everyone, the whole Borscht Ball line-up!

How does your role as Director of FolksbieneRU play into your vision of The Borscht Ball?

I and many of my peers do not identify themselves Jewishly primarily through religion and tradition, but rather we connect via the music and cultural language. When curating Borscht Ball, I thought about creating an alternative educational environment, fostering my audiences’ curiosities about their own Russian Jewish stories and identities, celebrating our heritage through each individual lens. Thus, the wide variety of performers that still somehow fit under this unwieldy umbrella.

Get tickets for the Borscht Ball here.