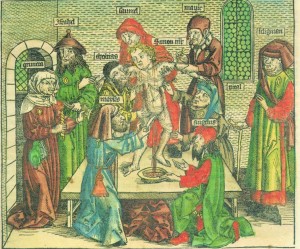 While some observers may be bewitched, bothered and bewildered by Sarah Palin’s claim that she’s been the victim of a blood libel, Jewdar is beside ourselves with joy.

First of all, we think the blame being cast on her for the shooting in Arizona is, at least for now, unjustified. Sometimes, insane people can be influenced by external influences, like, say, American Renaissance; sometimes, they are just responding to their own internal logic. From Loughner’s rants, it seems pretty clear that at least at this point, there’s no reason to conclude it’s the former.

Now, while some might find it a strange and obscure term with which most Americans wouldn’t be familiar, and which is primarily useful for letting us know that her speechwriter is an MOT.

We completely understand why she’d use the term—not that it’s justified, but from a Tea Party perspective, it makes more sense than any of the more traditional alternatives. Normally, a politician being targeted unjustly would use the accusation of “Mccarthyism” or “Witch-hunting,” but since neither of those is viewed as a negative by Palin’s base, she couldn’t really throw them around, which leaves only “Old Faithful.”

Bringing us to why we are truly thrilled by the Palin “blood libel”—granted, we’d still like to see a little more imagination involved (you know, like moving beyond the history of anti-Jewish persecution), but nonetheless, it’s nice to see American political discourse embracing another historical trope beside the Holocaust.