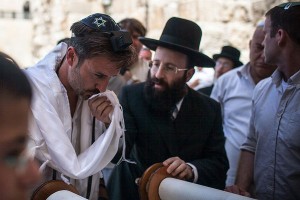 As some Heeb readers may be aware, the second most important Arquette (above, without the black hat) filed for divorce this week, nearly two years after he and Courtney Cox separated. As Jewdar learned in grad school, history isn’t about “when things happen,” it’s about “why things happen when they happen.” Rarely has a major historical event’s causation been more clear than in this case. So what brought on David Arquette’s decision? As more Heeb readers are doubtlessly aware, Arquette, on location filming a show at the Kotel, had his bar mitzvah, 27 years late, but nu, better than never.  Ending a marriage isn’t easy. But as Dovid ben Avrohom showed us all, sometimes, a man’s gotta do what a man’s gotta do.