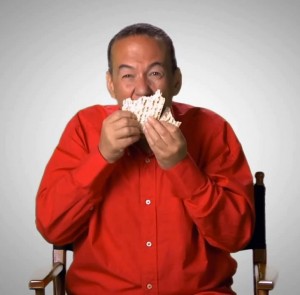 The American Jewish World Service (AJWS) turns 25 this year, in fact it celebrated at a gala event here in New York last night. The organization’s main goal is to bring justice around the world through service, not just dollars. Though they write plenty of checks to support those in need (often non-Jewish communities, mind you) their real secret sauce is in the human support they offer in 34 countries, sending volunteers to both learn about cultures in need and teach non-violent sustainable living. I was there last night as donors, volunteers and war-torn activists descended upon sides of brisket and miles of sushi before a moving presentation highlighting the organization’s accomplishments over the last quarter decade.

I expected the show stopper to be Judd Apatow’s much touted (there wasn’t a piece of publicity for this event that didn’t bear his name) short PSA. It turns out the comedy powerhouse he assembled was overshadowed by Leymah R. Gbowee, a Liberian activist who has seen two civil wars in her lifetime yet still manages to crack jokes endlessly in her fiery, booming tenor. As she walked up to the stage in a flowing dress that hugged her curves, she stumbled briefly, announcing to the packed theater “I almost had a West African fall, thanks to my fashion!” Uproarious applause and laughter. She was one of many leaders whose courage was highlighted

Now about that Apatow video.

The PSA was created by the mega producer of the moment as well as Jordan Rubin, who was actually on hand to present it. The premise was to write about 1001 jokes for non-Jews to crack about the AJWS. It looks they ran into an obvious problem: there are a bunch of really funny Jews out there who would have been left out. Don Johnson, not a Jew, falls flat in this video when he starts inappropriately describing his dream Jewess. Sarah Silverman, everyone’s favorite Yid, steals the limelight when she spouts off a few impressive AJWS fundraising stats. “That really throws a wrench in the Jews are cheap premise. If you think that’s cheap there’s no way you’re Asian because you’re really bad at math.” Andy Samberg, Ben Stiller, Gilbert Gottfried, Tracy Morgan, Lindsay Lohan and Triumph the Insult Comic Dog are just a few of the celebrities assembled for the hilarious video. Over on Twitter, I asked Judd what the deal was with the warning label “Not Approved by AJWS”. It seemed a disclaimer to keep any crotchety donors from getting annoyed by his wit. We know all too well how easy it is to to piss off the Bubby set. Apparently, it’s a joke. He is one funny Jew. 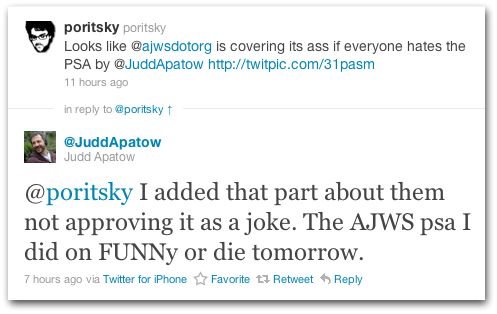