And You Think Your Family Doesn’t Get You 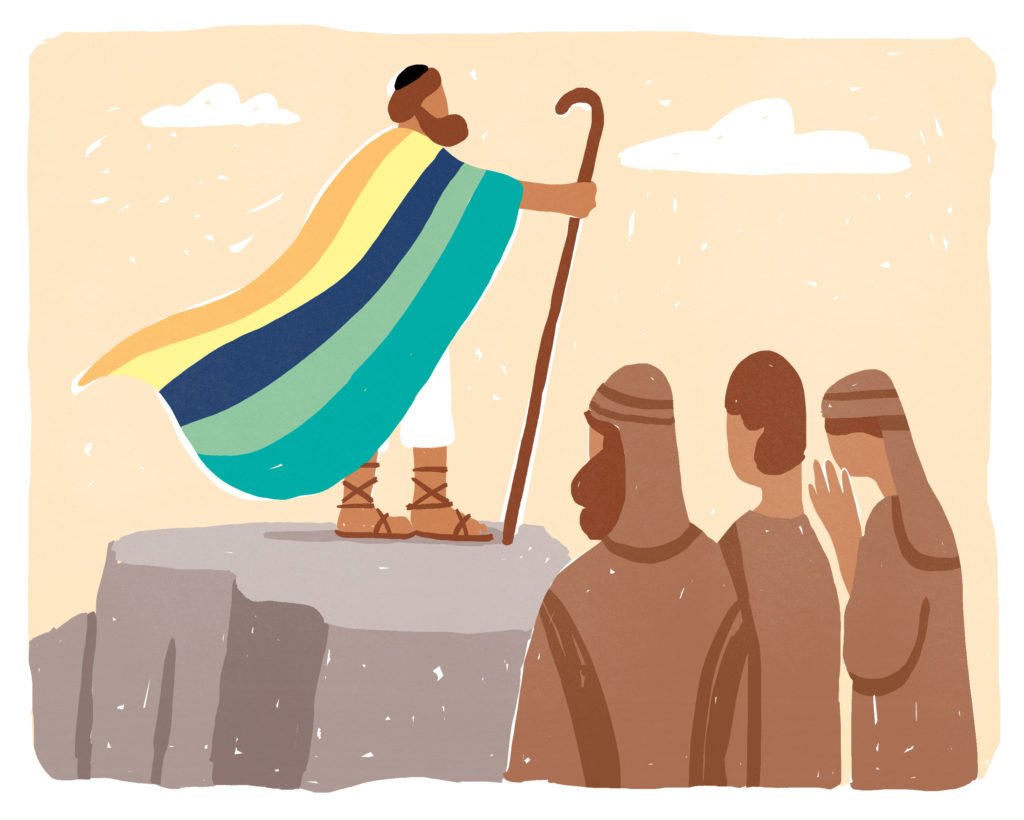 Joseph was a really sexy, gifted, smart, awesome, perfect teenager whose mean older brothers didn’t understand just how awesome he was. But his father did and made him a special, sexy coat.

Joseph: Hey. Hey, brothers. Check out my new coat! Don’t I look sexy in it?
Brothers: It’s really great, Joseph.
Joseph: Wanna hear about the dream I had last night?
Brothers: Is it about how gifted and sexy and awesome you are?
Joseph: No …
Brothers: What happened in it?
Joseph: So we’re all stalks of grain in a field, and you all bow down to me.
Brothers: Wow, Joseph. What could that possibly mean?
Joseph: Well, I’m a master dream interpretator, so I figured out that the eleven stalks of grain are a metaphor for the eleven of you.
Brothers: Uhuh, uhuh, with you so far.
Joseph: And I’m me.
Brothers: What a clearcut metaphor. Kinda makes you wonder what high school English student made it up.
God: It’s a first draft!

So Joseph’s brothers beat him up, tossed him in a pit, and sold him to some passing merchants for 20 pieces of silver, or as they called it back then, two thirds of a Jesus.
They got home and gave the coat to his dad, Jacob.

Jacob: What happened to Joseph?
Brothers: A wild beast ate him.
Jacob: NOOOO!!! But he was so gifted and sexy and awesome! We should have been nicer to him!

Jacob was so sad to hear about Joseph’s death that he walked around in underwear made out of goat hair for a while. Joseph, meanwhile, was doing great for someone who had just been sold into slavery. He ended up with an Egyptian master who liked him because he was so gifted and sexy and awesome. Joseph was such a stud that the mistress of the house subtly flirted with him, ancient times style.

Mistress: Lie with me!

But she wasn’t hot enough for Joseph, so he bravely ran away. The mistress accused him of coming onto her, and the master threw Joseph in prison. In prison, all the prisoners thought Joseph was really cool and wanted to be his friend. One day, Pharaoh heard about how smart Joseph was, so he asked him to interpret his dream.

Pharaoh: In my dream, seven starving cows eat seven healthy cows. Oh, and I had this other dream, where seven sickly stalks of grain eat seven healthy stalks of grain and supplements sold at a local Hemp store.
Joseph: Interesting. In my professional opinion, those two dreams might be related.
Pharaoh: Wow. You’re like, a genius or something.
Joseph: I KNOW, right? But my family totally doesn’t get me.
Pharaoh: Well, I bet they appreciate you now that you’re gone.
Joseph: Oh FOR SURE. Okay, so your dream means there’s gonna be seven years of good harvests, and then seven years of famine. So you should stock food for a while.
Pharaoh: You are so impressive, I’m going to promote you to being in charge of Egypt.
Joseph: Don’t you want to see if I’m right about the famine first?
Pharaoh: What?
Joseph: Nevermind.

Seven good farming years went by. Then famine hit. Everybody outside Egypt was starving, including Jacob and his sons. So they came to Egypt to beg for help. Joseph, who was now basically Egypt’s vice president, watched his long lost family stumble into the throne room. They were tired from traveling, thin from hunger. As he gazed upon these precious loved ones he thought he’d never see again, these familiar faces who now desperately needed him, he had one thought: payback time.