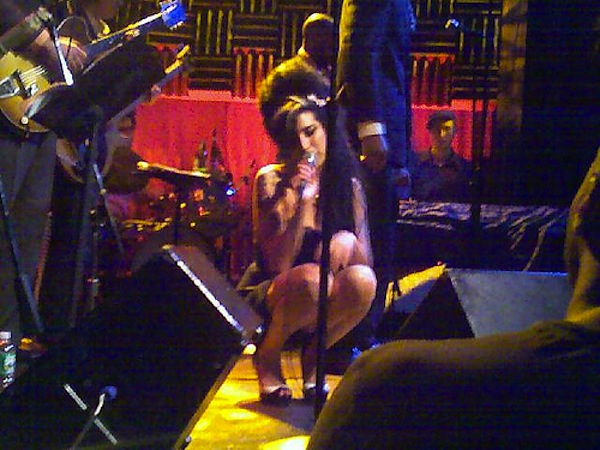 On the night of January 16th, 2007, Amy Winehouse still looked reasonably in control. With this being her first stateside performance at New York’s Joe Pub, and with Jay-Z in attendance, she belted out her time-resistant songs with a charming, shaky confidence. I knew that night with all certainty that she was vocally unparalleled–this isn’t a hindsight thing nor is it a claim of Simon Cowell-like talent recognition. If you had been there, you too would have known that with her drinking relatively in control, she could sound galactic (The picture above was taken that night with my Motorola Razor. Hence the poor quality).

For months after that inaugural set, I pursued Amy to be a cover story for Heeb. Her publicists, initially expressing huge interest, started soon thereafter responding in the negative explaining that they were now limiting her press engagements. Winehouse’s press person cited an insane touring schedule and a lack of time. This may all be true, but I can’t help but wonder if this is when Amy started to unravel. Winehouse had always seemed uncomfortable and conflicted with the attention she ultimately deserved, and alcohol and drugs became her way out, and anorexia was seemingly the only thing she could control.

It became glaringly obvious that Amy needed help. Even peripheral pop culture consumers were familiar with her shenanigans, such as her abusive relationship with Blake Fielder-Civil, or the YouTube videos of crack smoking with Pete Doherty. At one point, the question of whether she would destroy herself or not was replaced with “when would she destroy herself?”

There’s something about this loss that makes me a little uncomfortable. The first is that this notion of her joining the 27 Club somewhat romanticizes her untimely demise. It shouldn’t. The second is that while I’m sure there were a fair share of supporters helping Amy to heal and find comfort, what of the enablers? If Amy was still in horrible shape, why was she encouraged, for example, to do a limited European tour this the summer? Why was she treated as a commodity pushed and pushed for our schadenfreude and to the benefit of the whorish media all the way to this point of immolation?

And after the opportunity now gone, I regret the fact that Heeb never got the chance to talk about her Judaism. The only thing I could find online, from Totally Jewish, are her memories of going to cheder classes every Sunday but hating them, and attending synagogue for Yom Kippur only out of respect. “Being Jewish to me is about being together as a real family,” she said. “It’s not about lighting candles and saying a brocha [blessing].”

It also saddens me that so much of the controversy and drama now overshadows her short yet brilliant contribution to pop music. When I look back on that wet January night, I consider it a blessed opportunity to have been there. To have seen her dilapidated beehive in person, to have heard those godly pipes in the confines of an intimate downtown club is an experience rare even for a music journalist.

And when her posthumous album inevitably comes out, which I hope it will, I’ll then pour myself a non-alcoholic drink and toast a life gone too soon.
They tried to make her go to rehab. Too bad they didn’t try harder. L’chaim.