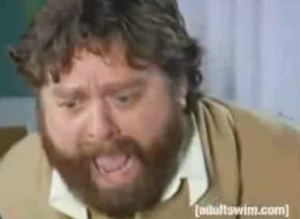 For the last year, the Heeb office has been tortured by one particular YouTube vid. It’s two seconds ripped from the 1:09 mark of a Tim & Eric sketch starring Zach Galifianakis as the asshole thespian, Tairy Greene, and that is looped for a good three minutes straight. It’s likely the most annoying bit of media ever introduce to the Internet, and I love it.

Credit for this dastardly digital item must go to the 21-year old Brenden, a.k.a. The Other Venkman, a history major at a junior college in California who plans to transfer to U.C. Davis or U.C. Santa Cruz in the fall.

“My inspiration [to create the obnoxious meme] was derived mainly the reaction on the kid’s face when Tairy Greene started yelling at him,” Brenden emailed me. “It’s my favorite segment of the skit, so I thought if I looped it it would be more funny.”

Watch the most annoying meme in YouTube history after the jump.