Let’s face it – Jews have a great track record when it comes to appropriating (or, at least, approximating) Christmas:

For too long, though, we’ve felt the holiday spirit without being able to look the part. Enter Geltfiend.com, the Etsy-esque home for ugly sweaters. Seasonal sweaters. Hanukkah sweaters. 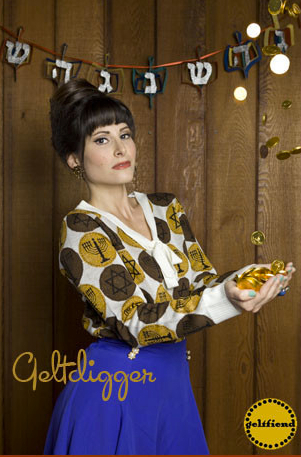 From humble beginnings this summer as a kickstarter campaign, Geltfiend has broken the Christmas’ sweater monopoly with five Hanukkah-themed designs, including Orthodox snowmen and tessellated dreidels. Perhaps most surprising about Geltfiend isn’t that it exists but that, nearly a decade after The OC introduced the world to Chrismukkah, it’s taken this long. After all, it usually only a few days before some hebrew school or youth group to “Jew up” the latest top-40 radio hit.

And so, with temperatures dropping and Hanukkah looming, we spoke with the gelt fiend herself, founder Carin Agiman:

Hi Carin! Thanks for chatting. Can you tell our readers a little about yourself? 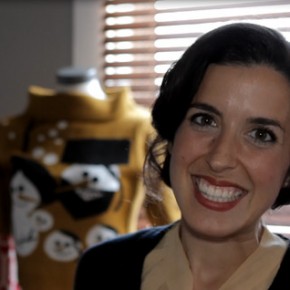 I’m Carin Agiman, the founder of Geltfiend.  Culturally Jewish and very smiley. Like my face might be splitting in two.  Up until recently, I was working as the Accounting Manager at a fashion accessory company, but Geltfiend has, thankfully, come to my rescue.   Now I’m the star of a one woman show called “watch me do everything I’ve been wanting to do for a long effin time, but all at once.”

And what, exactly, is “Geltfiend”?

Geltfiend is what happened when I mixed my love of pop-culture with some good old-fashioned Jewish angst.  It’s also the name I call myself around the holidays, when I start hoarding Chanukah gelt and hiding empty gelt wrappers under sofa cushions.  Geltfiend officially started earlier this year when I decided that I wasn’t going to go another year being invited to holiday parties and not having anything Jewey to wear.  After doing a little bit of research, and realizing that no, it wasn’t just my imagination, there really weren’t any good Chanukah sweaters out there, I got to work.

Tell me about the sweaters – who designed them?

I designed all the sweaters myself.  I drew inspiration from early 1960’s sweater designs and then Jewed them up—a dreidle here, a Hassidic snow-family there, and voile!   There are a few designs that I decided not to produce this year, but they’ll probably make an appearance in next year’s collection.  I’m my own target market, so if it was something I would wear, it passed the test.  I ran designs by friends, and as long as no one threw up on the spot, I felt pretty good about it.

I imagine most sweaters are being shipped to places like New York and LA – have you shipped anywhere unusual?

We had a Kickstarter campaign during August, and the first thing that I did when the campaign closed was plug in all of the shipping addresses into one of those interactive maps because I couldn’t wait to see where all the support came from.  We ended up shipping sweaters to Spain, Finland, the UK and even Australia.  It blew my mind that someone could be wearing a Geltfiend sweater while ice skating in Finland.

What’s the feedback been, so far? Any surprises?

The feedback has been overwhelmingly positive.  I don’t think I’ve stopped smiling since August, and yes, my face hurts.  We definitely need to expand our sizing for next year, and increase the product line – adult onesies, anyone? – so we have a lot of awesome work ahead of us.

Lots of people – Jews, non-Jews, whoever – ironically  wear “ugly” Christmas sweaters. What would you think of non-Jews ironically wearing your Chanukah sweaters?

I LOVE the idea of non-Jews wearing Geltfiend sweaters ironically.  After years of Jews doing all kinds of Christmas stuff, I think it will be awesome to think that Jewish culture has really made its way into the wider culture.  I also think that humor and culture can bring people together, and if Geltfiend can be a way for people to do that, nothing would make me happier.

You mentioned “adult onesies”. Where else do you see the line going?

We’re definitely going to move beyond Chanukah, and most likely beyond apparel.  There are many many gaps in the Jewish product market, and we have 5773 years of history and cultural references to draw from, which is an awesome thing to have at hand.  I’d tell you what we’re thinking about, but I’d run the risk of some Israeli named Shmulik making them himself by end of day.

What’s the reaction been like from the “institutional” Jewish world – rabbis, etc. Do they get what you’re trying to do?

We all have different reference points, but I think everyone can appreciate someone giving a Jewish holiday some attention.

I ran the sweaters by a Chabadnik family I’m close to in Long Beach, and they loved them.  One of the funniest moments was showing them the Crown Heights sweater, and them not recognizing that the snowmen were Hassidic.  That look – the hat, the yarmulke, the beard – is so familiar to them, that all they saw were snowmen.  “There’s nothing Jewish about this sweater,” they commented, and my jaw dropped.  Once they realized, we all had a pretty good laugh.  And then we had some soup croutons.