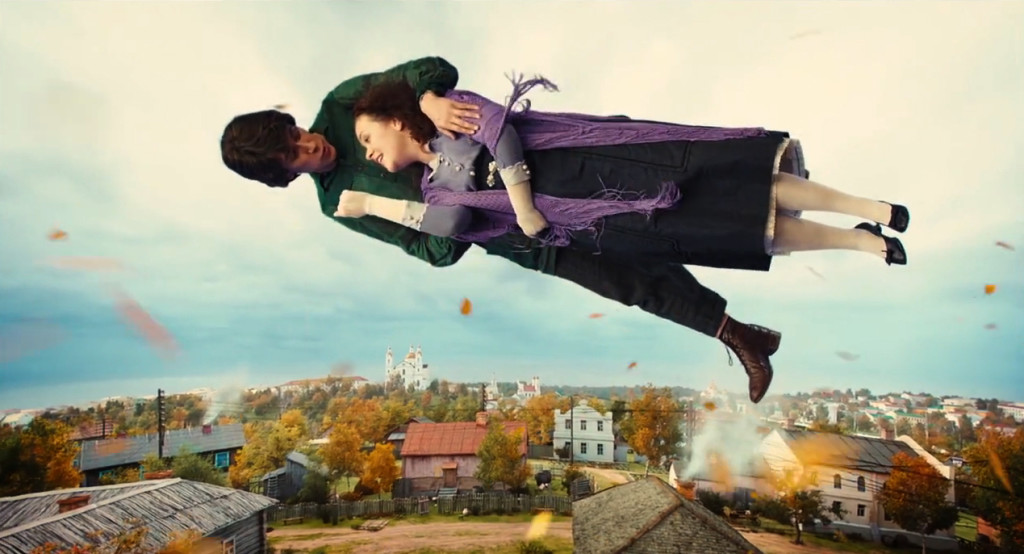 Alexander Mitta’s Chagall-Malevich is a strange little film. Part bio-pic, part art/history lesson, the film spins a vivid and raucous yarn through the tumultuous years of war and revolution in the early twentieth century. At the center of it all is the modernist Jewish painter, Marc Chagall, portrayed by Leonid Bichevin.

I mention his Judaism because Chagall’s name and legacy has always been intertwined with his religion. He may well be the most famous Jewish painter of the twentieth-century, if not of any era. His work, however, was never ghettoized the way, well, most Jews were during his lifetime. His name was synonymous with the Paris School, an illustrious group that included Pablo Picasso, Piet Mondrian and Henri Matisse.

Though one could imagine a romantic film about Chagall in Belle Époque Paris, this is not that film. We see Chagall in Paris for only a brief instant, before he returns home to Vitebsk, a town in modern-day Belarus, to marry the girl of his dreams, Bella (Kristina Schneidermann). Up to Chagall’s return she is being pursued by a poet, Naum (Semyon Shkalikov), whose heart seemingly turns to stone when she rejects him. After their wedding, which is truly one of the great Jewish weddings to be captured on film (see also: Goodbye, Columbus and Barney’s Version) particularly for Shkalikov’s furious dancing, Marc and Bella’s plans to move back to Paris are cut short by the outbreak of war. And with the war came revolution.

The years pass and we see Chagall, with his wife and new daughter, open an art school in Vitebsk. If he can’t return to Europe, he will make his home town into a new Paris. He quickly learns that this new, revolutionary world he lives in has little room for his style of artwork. Naum, the onetime poet, has risen in the ranks to become a local commissar, though really gangster or thug would be better titles. He can (and does) execute anyone for any crime without proof or trial. But perhaps the greatest threat to Chagall’s sensibility comes not from Naum, but from an artist, the other half of the film’s title.

If Chagall’s mission is to fill the world with love through art, Kazimir Malevich’s (Anatoliy Belyy) is to become one with the universe through it. Portrayed as part-artist, part-pilosopher and part-messiah, Malevich teaches his students Suprematism, a form far more abstract than Chagall’s methods. His sights are set higher than making paintings; he wants to become one with the universe. He speaks not metaphorically, but literally. His charisma ultimately makes Chagall’s works of people floating through the sky seem quaint and out-dated. The students defect to Malevich.

The film recreates many of the paintings of both Chagall and Malevich. Almost every frame of the film is an attempt to duplicate the style of Chagall. Strange splotches of color abound. It is a noble effort to bring Chagall’s style to the screen, but it often feels forced and overwrought. The film is fantastical, but these stylistic choices still feel so grounded in reality. They go far, but perhaps not far enough.

I wonder what Russian audiences must think of this film. Though the Soviet era has ended, it was only a generation ago that the secret police could bring spurious charges on enemies of the state. There is much in the art and culture of the revolutionary era that remains revered to this day, not least of all, as it happens, contributions to the cinema. But as Mitta’s film shows, there is a long and dark history that goes with that.

Fans of Chagall’s work will find much to love in Chagall-Malevich. Unfortunately the narrative is disjointed and the artist himself is mostly decoration. The film’s most compelling threads come not from Chagall, but those who created the tumult around him. Mitta tries to give Chagall’s demands for love a fighting chance. In the face of tremendous upheaval, that love was barely able to survive. One even wonders to this day if the cinematic Chagall’s dream of a form based on love has ever prevailed. To think on it too long is, I think, a more depressing message than the film aims for.