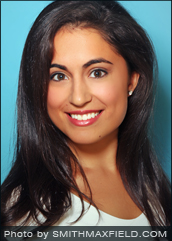 Heeb wants to heap great big giant kudos on Miss Massachusetts.  Why are we taking time out of our incredibly busy schedule to take Jewdicial Notice (We know, can you believe it took us this long to come up with that?) of this year’s Bay State beauty queen?  Because not only is she a MOT, but such a MOT, you wouldn’t believe.

As if her shayne Yiddishe punim weren’t enough, “Loren Galler Rabinowitz” should be enough of a giveaway for even the most visually impaired (and if that’s not enough, did we mention she went to Harvard?) While some might question the chances of a short, brunette against the tall blondes who stereotypically compete in these things, Jewdar’s not concerned.

Far be it for us to claim that Jews own the media (they actually have a time-share with gays), but Jewdar finds it a bit curious that 5 years after the pageant was dropped from ABC, it just so happens that ABC picks it up again the year there’s a Jewish contestant?  We won’t know until January 15, but yeah, Jewdar likes those odds.