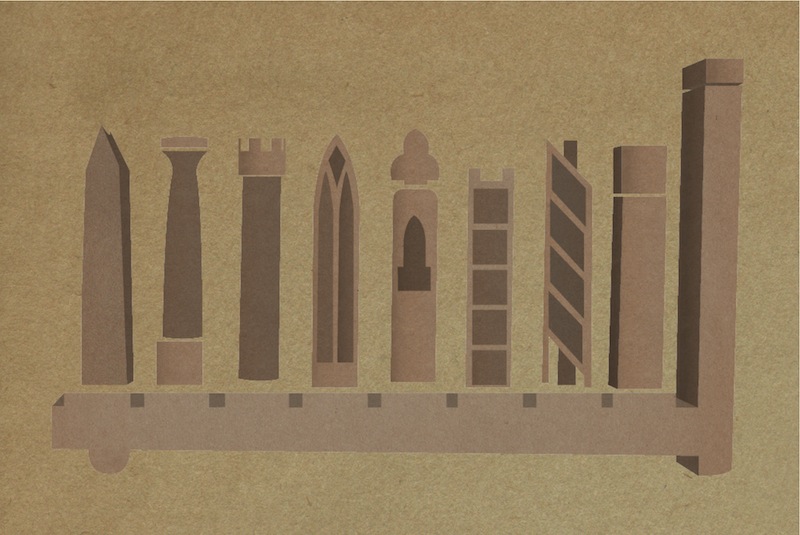 When Pritzker Prize winning architect Richard Meier isn’t gracing the hills of Beverly with his cloyingly pristine white homes replete with cruise liner balustrades and gridded surfaces – “squareness” apparently synonymous with “rightness” – this original member of the New York Five, the so-called Five Whites, has turned his sights on an iconic piece of Judaica, a Hannukiyah.

Commissioned by the Israel Museum back in 1985, a limited edition of the swanky candleholders will be available for purchase this month for a meagre $1000 (and I don’t mean chocolate money). Cast in weighty pewter, Meier has drawn out bits of architecture, emblematic of each period in the history of Jewish oppression and rendered each as a branch on the designer candelabra.  From an obelisk symbolizing slavery in Egypt to a watchtower evoking the Holocaust of Nazi Germany, the architect seems to have decided that one miraculous story of survival just doesn’t cut it.  Instead, the conflagration container is adorned with a totemic survey of the entire history of heeb suffering.

Now if you’ve got the gelt to burn – and perhaps a bit of extra guilt to be brandished – then certainly this  is absolutely the de facto solution. What better way to rejoice in Judaism’s collective resilience than to commemorate them – mind you by setting them ablaze – with the architecture(s) of oppression? Having said that, when you’re spending your hard earned coin on holiday keepsakes, especially in the name of the cause, why stop at what Meier is calling “abstract representations” and “not intended as literal” ones when they are, apparently ever so close. Though his hammer swings mighty close enough to our heads with his proposition to leave us spinning, we wondered whether we couldn’t do him one better.

How about something a little more in tune with the neuroses of the everyday yid?  Why not get straight down to the heart of what really plagues the Jew?  Some pewter in shape of Joshy’s foreskin perhaps, a stark brass column to stand for Devorah’s emotional neglect, maybe a copper hand to represent mom’s smothering, or a Lucite pair of baitsim to signify what mom caused dad to lose.  In other words, If it’s campaigns of fear and awe that we’re after,  us modern heebs don’t need to drop zaidy’s kesef on an altacocker architect’s version of suffering and survival to keep the candles burning, we’re doing, umm, just fine.